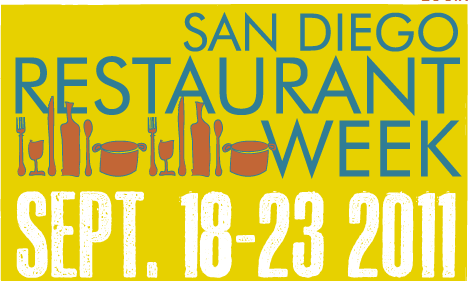 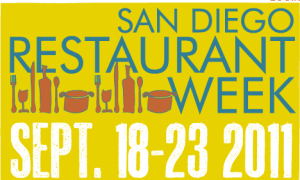 Twice a year during Restaurant Week, diners have the opportunity to sample a variety 180+ San Diego County restaurants. This year’s fall event begins September 18 and continues for two weeks until September 30. And there’s a new option this time: a two-course lunch for $10, $15 or $20.

It’s a given that the choices for restaurant week are overwhelming, but with special thanks to McFarlane Promotions and Brook Larios of PlainClarity Communications, I was able to sample a variety of dishes at Terra American Bistro with a few other local food bloggers.

Terra moved from their Hillcrest location to the East College area a few months ago. Being away from the bustling Hillcrest scene, one would imagine that business has slowed down. It hasn’t and for good reason — Chef Jeff Rossman’s reputation for using quality local produce in his creative and delicious dishes precedes him. Terra’s selections for Restaurant Week are also available on the regular menu for those less willing to commit to three courses but where would the fun in that be?

The first course starts off with a strong foot for Terra and the choices are:

It’s a hard decision but for those wanting to stick to a standard salad as a starter, you can’t go wrong with their roasted beet and green salad with goat cheese, toasted hazelnuts topped with a honey-walnut vinaigrette. As someone who is repelled by all things beet-related, this dish was really good. A very strong contender for a salad alternative are the tender pumpkin raviolis covered in roasted corn cream and toasted hazelnuts. It perfectly balanced the two star ingredients and was a favorite at our table. I wouldn’t mind building a dinner around this dish.

We only tasted two of the items: pot roast and the flat iron steak. The braised pot roast barely edged out the flat iron steak. It was sooo tender, which I suspect is due to the flavorful beer braise. It was accompanied by Yukon potato mash and local vegetables with a drizzle of truffle oil — the delicious smell that came from this still haunts me. Trying to replicate this dish will be my objective this fall. Although the lobster mac ‘n cheese wasn’t included in the tasting, I’ll place that as a strong contender for anyone desiring seafood. I’ll definitely be back to try their version in the very near future.

The final course was created for those with a discriminating sweet tooth.

My hands-down favorite was the creme brulee topped with a bit of homemade biscotti, blueberries and a strawberry garnish. The dessert was tinged with a bit of lavender and served fresh out of the oven. While the chocolate cigar (chocolate ganache wrapped in phyllo dough and deep fried) is an interesting concept, the dessert left much to be desired. It could have used perhaps something salty to break the sweetness of the chocolate? But it deserves a big applause for execution — it was served in an cigar ashtray. All things considered, it’s a better addiction than tobacco. Along with the mac ‘n cheese, I’ll certainly be back to try their budino.

While these are my recommendations, the rest of the menu does not disappoint and likely has something for everyone. Restaurant Week is definitely a great opportunity to try their food. A three-course meal at Terra during this event  is $30.

I’m confident reservations will be going fast and can be made through their restaurant website.

8 thoughts on “For Your Restaurant Week Consideration: Terra American Bistro”