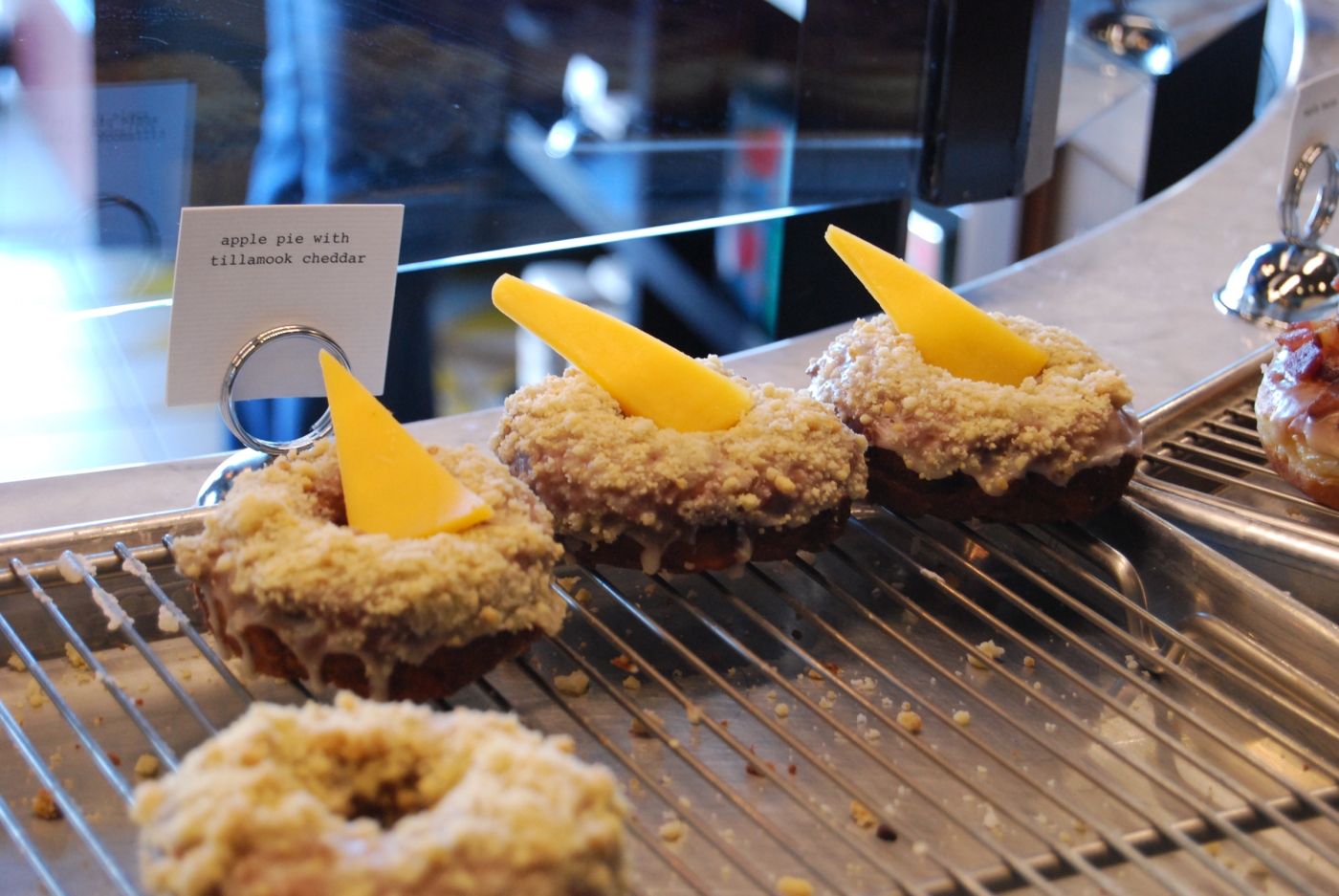 One thing I appreciate about Sidecar Doughnuts & Coffee is the AP Style spelling of ‘doughnuts’ instead of the more common ‘donuts.’ It immediately concocts sophistication and extra effort in both spelling out the extra letters and it especially rings true when it comes to the actual donut itself. But that’s only one of many positive traits to Sidecar.

So when Anita (of Diary of a Mad Hungry Woman) suggested I check them out, I made a special trip to Orange County to do just that.

Sidecar Doughnuts & Coffee is nestled in a unremarkable Costa Mesa strip mall but once inside, it’s a donut wonderland. Even on the verge of the clock hitting noon, they were still making donuts — a big plus considering San Diego’s Donut Bar has been criticized for usually running out of their stock early. Sidecar is open every day (with Sunday being their busiest) and continue making donuts until they close at 2.

Eight varieties are always available and for our visit they featured huckleberry, cinnamon spice, maple bacon, apple pie, black velvet with mascarpone glaze, madagascar vanilla twist, apricot with cream and chocolate with valrhona pearls. The menu rotates weekly with the exception of cinnamon spice and huckleberry, which are available all the time. It’s a nice variety, satisfying both chocolate and fruit lovers. And I learned that Sidecar occasionally offers a savory donut as well.

Without building up anticipation, everything was spectacular and it was hard to chose a favorite. The Tillamook cheese slice on top of the apple pie donut using Granny Smith apples was a nice touch. The raised apricot with soured cream and pistachios was light despite the copicius toppings. And I was glad to see crisp (not flacid) bacon on the maple donut.

While some artisan donut shops focus on the topping, Sidecar focuses on the entire product. The berries in the huckleberry are flown in from Portland and are folded into the batter as well as used in the topping. I had given up on cake donuts a long time ago because I found them too dense, but their black velvet cake is surprisingly light despite the deep color and not tooth-achingly sweet. (The rose petal topping the black velvet is handpicked from co-owner’s Chi-lin’s garden.)

A good donut is not complete without a good cup of coffee. Portland’s own Stumptown Coffee is served by the cup and you can also grab of bag of beans to make a cup at home.

With this quality and high standards to the art of donut making, the prices seem appropriate with a range of $2-3.50 each. If you find yourself in Orange County and are a donut fiend like myself, this place deserves a special visit.

7 thoughts on “Sidecar Doughnuts & Coffee: On Doing It Right”