Most happy endings don’t have a follow up, here’s ours.

Shortly after reuniting with Doctor on Sunday and telling Babs our how of how he came to us, she warned us about several things.

Doctor may suffer from PTSD. Who knows what he encountered out there? Did a bus nearly hit him? Did a certain sound scare him? Most of all, be aware of his emotions and what might set him off.

Don’t worry if Doctor sleeps more than usual. Now that he’s in a safe place, he’ll finally have a chance to catch up on sleep and the week following, all we did was sleep.

Take him to the vet as soon as possible. The combination of it being Sunday and him not pooping, we delayed the visit until Monday so a fecal sample could be examined for worms and parasites, plus address anything that may come up overnight. 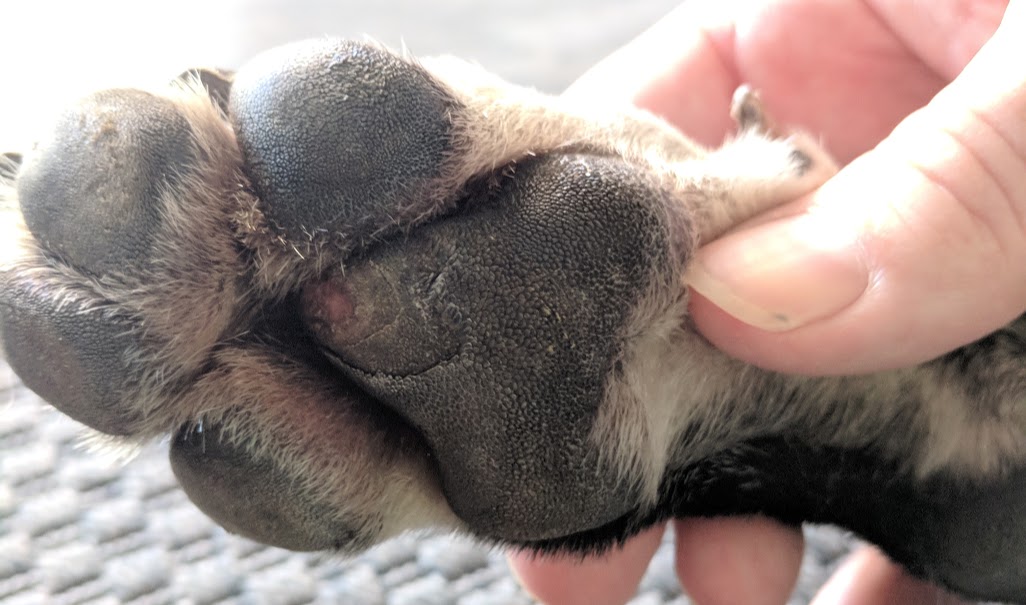 A preliminary exam by us and follow up by the emergency vet showed his pads were still raw/bloody and the nails on his rear paws ground to the blood vessel. Fecal examination came back clean, no broken bones and he was free of ticks. The vet prescribed a course of pain killers and anti-inflammatory drugs.

Since the start of the incident, I’d hoped Rover.com would remove/suspend the sitter from their database during their investigation, especially after I’d submitted a review. A few hours later I received blowback from Lauren citing “defaming/slanderous behavior” for indisputable events. (Sorry, but in the real world not every review is going to be glowing and gushing with praise. See Yelp for examples on how reviews work.)

She also revealed to me via text that she’s been following my social media accounts regarding the incident. In return, I did a shallow dive into her social media accounts and uncovered alleged drug use and being near or around drugs (recreational and otherwise). I submitted my timeline of events to Rover.com along with screenshots from her social media. While the photos weren’t recent, it revealed a pattern showing lack of judgment and a dangerous environment where dogs under her care may ingest drugs.

To this day, I still don’t know why it took Lauren almost an hour to contact us about Doctor’s escape or how his paws were hurt to the point of bleeding, leaving a bloody trail within the first few minutes of the chase. Babs Fry tried to contact her in the final hours of the search when she was needed the most, but she never returned any of her calls or texts. I hope Lauren will never be responsible for a living thing again or have a job that requires reading verbal and written directions.

If you’ve been following closely, you’ll know that Babs Fry played an integral part in finding Doctor and yet we still haven’t met her in person. During Doctor’s 88 missing hours, she was always available via phone and text for pep talks during our darkest moments, helping manage our fears and was crucial at the very end of the event. Babs came up with the plan that eventually helped bring Doctor to us using chicken as a lure. In retrospect, there was no better way to be reunited. The reunion was just Doctor, Paul and me.

I hope to meet Babs soon and pay it forward to someone else who has lost their pet. Read Babs Fry’s account of the how we found him here.

A lot of these tips are from the Babs Fry’s playbook of finding lost pets. The first and most important one is to remain calm — a hard one, I know. The first instinct is the go looking for your pet but keeping a calm head and noting where there pet was last seen will play into finding your pet.

Next step is posting on NextDoor, Pawboost, Craigslist and social media for lost pets in your community. Continue to monitor those pages and begin a public relations campaign for your lost pet. Is your pet skittish like Doctor? Mention that. 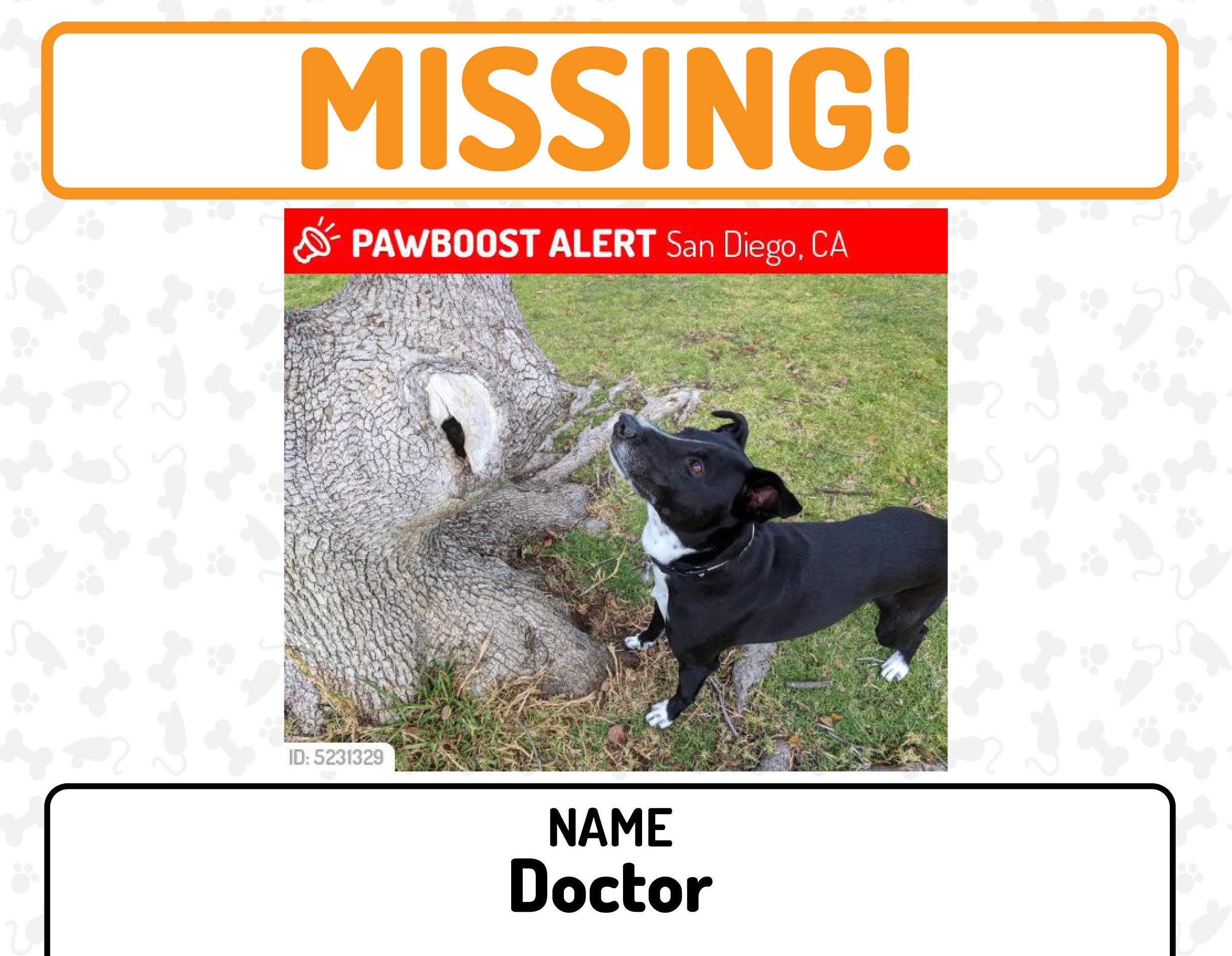 The next steps in your PR campaign are posters and lots of them, plastered around your pet’s last sighting and preferably around high-traffic areas within a two-mile radius. For high visibility, attach your lost sign to bright (fluorescent) paper to separate it from other flyers.

We printed Doctor’s posters on 12×18” photo paper. The downside to that was that we didn’t get the prints until 2 PM the next day (Thursday afternoon). To expedite the process, we also produced smaller copies from Kinko’s, still attaching them to bright paper to grab attention.

When creating your posters, try to include a full shot of your dog. Headshots are cute, it doesn’t show your entire dog. (Your dog if he’s on the run probably won’t stop long enough for you to examine his face.) Babs loved our posters but pointed out that sometimes it’s better not to include the dog’s name. The purpose of the posters is for people to report sightings of your dogs, not to chase after them calling their name.

Also avoid spreading your scent. Don’t go looking for your dog. The last places your dog will probably head is your home or the last location you were together. This is a hard one but with volunteers who saw our plea helped by putting up posters for us.

Google My Map also played an irreplaceable role in finding Doctor. Creating a custom map is free with any Google account. For Doctor, we marked our home, the sitter’s home, each and every eyewitness sighting and poster placement. Toward the last critical hours before our reunion, we utilized the satellite view to find his exact location in the canyon and set a reunion point the next trail over.

For the longest time, I’ve wanted kids, for a very brief time attempted to have a baby. Then I was laid off, my mom died, family discord on Paul’s side of the family plus school shootings and general state of the world made us reconsider. Instead we accepted fate using Doctor as substitute child – and it’s been wonderful. With this most recent incident, I know it’s impossible to even protect Doctor. I should have been more critical of the sitter’s character. I should have checked her social media accounts. There are thousands and thousands of “I should haves.” Lesson learned.

4 thoughts on “The Aftermath of Doctor’s Escape”