Questions that often haunt my thoughts when visiting Los Angeles are whether the glittery, moist people in Beverly Hills put their pants one leg at a time? Or lose socks in the dryer? Or have bad hair days? Or even, do they eat donuts?

I don’t have answers for the first three questions, although I question whether they even do their own laundry. But as for the donuts, I’m almost certain they do eat them, especially after a visit to Frittelli’s Gourmet Donuts and Coffee.

What sets Fritelli’s apart almost immediately from other donut shops is the use of quality ingredients. Their Web site cites the use of chocolates from France and Switzerland, real fruit fillings, high quality flour, imported butter, vanilla from Tahiti and Madagascar and no absolutely transfats.

Admittedly I was skeptical. Isn’t a donut just a donut regardless of the ingredients? Does it even make a difference?

All doubt was erased when I bit into the cake donut topped with strawberry glaze. My tongue confirmed that real strawberries were used in the glaze. None of the pink crap artificially sweetened to taste like strawberries — you know what I mean. As for the donut, it was melt in your mouth tender. Together, I have never tasted a better strawberry glazed cake donut. And this is from a person that only eats cake donuts, preferably plain to avoid the overly sweet toppings.

The tasting didn’t stop at one donut. Also tried were the mocha latte honey wheat (taste of real coffee and expresso incorporated into the vanilla glaze), blueberry cake (echos the strawberry glaze but with blueberries) and the outstanding peanut butter and jelly filled which in itself deserves its own sentence. It wasn’t the fact that the concept alone was simple but the execution of the donut surpassed my expectations. The peanut butter with strawberry filling was held together by a simple sweetened dough. It wasn’t overwhelming but comforting. 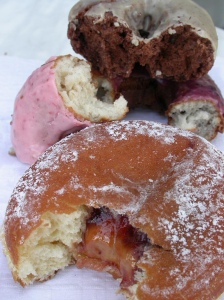 Other donuts offered include french crullers, donut holes, buttermilk, fritters, churros and flavors that incorporate Ceylon tea, Meyers lemons, and Callebaut chocolate. The only downside? Too many choices and not enough time. I hear their coffee is pretty good as well.

Of course, with the shop being located in Beverly Hills, the de rigueur pink donut boxes were replaced with chic blue ones with the Frittelli logo in script. And of course, the scene wouldn’t be complete without a slightly aloof person behind the counter that was no help at all in identifying donuts. I think I even saw a cringe from her at the snapping camera. Surely I was not a B.H. native especially in my wrinkled sundress.

If Frittelli’s was anything less than fantastic, the shop would have been kicked out on its hiney down Rodeo Drive a long time ago. Maybe that’s what happened to those Krispy Kreme shops.

13 thoughts on “Even in Beverly Hills they eat donuts”