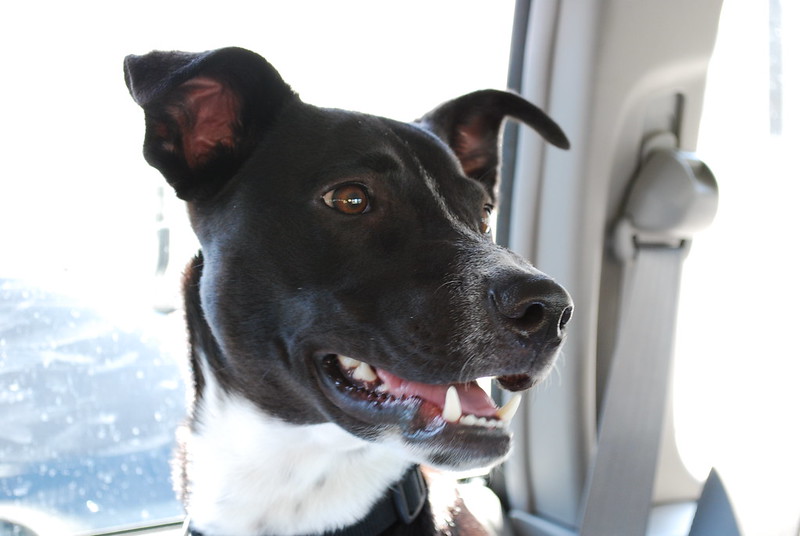 This post initially began as a “I love my dog and couldn’t imagine life without him” post. But I remember life without him mostly because it’s true that dogs are a lot of work.

We brought The Doctor home exactly one year ago today from another foster family. After pleading with Paul for weeks to foster a dog, I finally convinced him on his condition it was an older black lab mix. He didn’t want an unpredictable puppy that wasn’t housebroken — but I brought home Arrow, a scared 3-month puppy, anyways.

On the ride home, Arrow whimpered and made his way from the back seat to the passenger seat, then finally settling on my lap and unbuckled my seat belt in the process. When we finally arrived home, he ran off into nearby bushes and relieved himself. It was my first experience with dog poop; cute puppies don’t mean cute poops.

While we waited for Paul to return home with a crate, Arrow would avoid eye contact and instead diverted his attention to the Weather Channel.

Arrow’s stay with us was extended from a week to a month, delaying anyone from adopting him until we were sure we wanted to surrender him to another home. But I realized that Paul was a goner when he started calling him “The Doctor” to “try the name out.”

We finally adopted The Doctor in December as a gift to us. Since then he’s matured and grown into a much larger puppy who is sometimes headstrong but very loyal. Gone are the days when he’d panic upon meeting new people or other dogs. He’s a charmer and is a quick study (he learned how to shake, high-five and fist bump within a couple days). We always need to be in his line of sight. In the year since we’ve had him, we’ve also become much more outdoorsy. We take regular walks and jaunts to the park or beach. And people know our dog on a first name basis without any clue to ours. But I miss those days where I could sleep in without a care. I especially miss the times I can be away for home for hours and not have to worry about another creature. And then there’s the issue with the mailman. Even Doctor falls into clichés. But we love him and I wouldn’t have it any other way.

8 thoughts on “One Year Later: Our Life with a Dog”