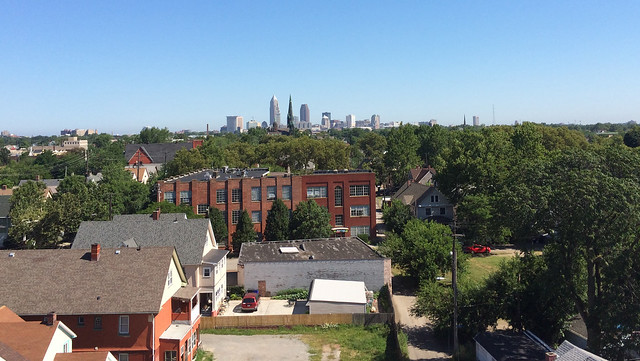 In an effort to catch up with posts, I thought I’d write about my visit to Cleveland last year. My brother was moving from Ohio to Kentucky later in the year so I made it a point to make one last visit before he and my sister-in-law packed up and left the state.

The visit was bittersweet. I hadn’t seen him in a while even after my mom died. Also too, I realized it would be my very last visit – that’s unless I’m sent to the city for an assignment. In the ten years since my brother has lived there, I’ve visited at least five times and the last time was with our mom. Who would’ve guessed that I would be so connected to Cleveland??

I made the solo trip in in August and  when I arrived I noticed that all throughout the city  the preparations for the Republican convention in 2016. 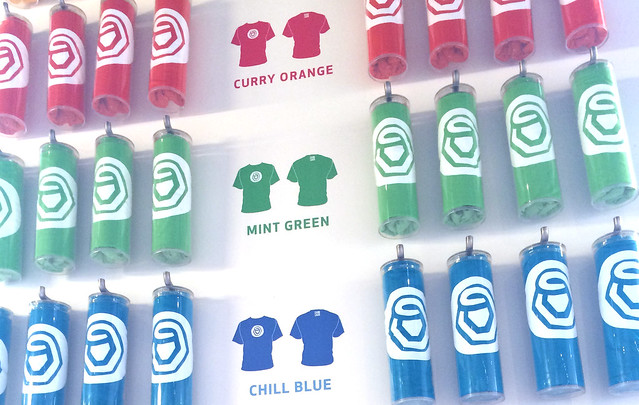 Traveling East is hard! You basically lose several hours and to get in while its still day light requires you to leave on the earliest possible flight. I didn’t eat all day and one of the first stops was Choolaah Indian BBQ on Chagrin Boulevard in Beachwood, OH. It’s a fast casual restaurant featuring four tandoor clay ovens behind glass wall that you can view from the dining room. The signage was very sleek (think McDonald’s but with an Indian twist) – they even sell their t-shirts. Choolaah has only one location and it’s a restaurant I can foresee it going national. 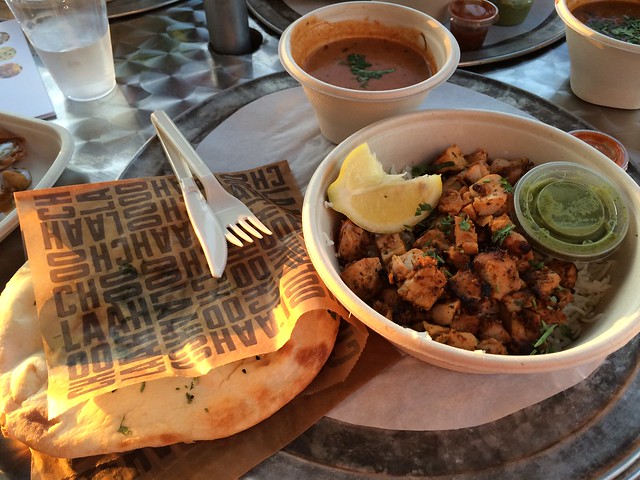 As per any visit with my family, we ordered almost the whole menu so I can try a little bit of every thing. My order was the chicken tikka masala that came with freshly made naan and mint yogurt sauce. An interesting fact: any dish incorporating cheese is sourced from local Amish farmers. 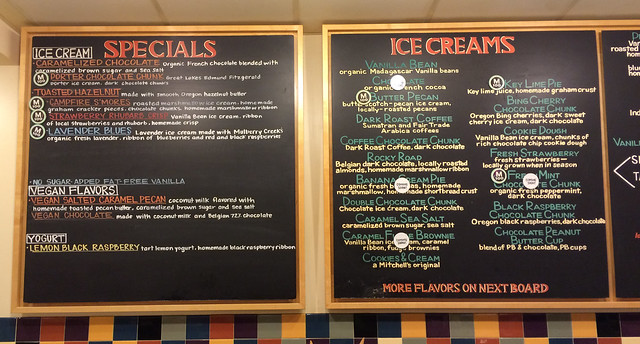 We followed that up with Mitchell’s, one of my favorite ice cream places that I’ve visited on previous trips and I always order the bing cherry chocolate chunk. The ice cream at Mitchell’s is sourced locally encompassing chunk elements in the mix. It’s reminiscent of Ben & Jerry’s before the brand went national while Jeni’s Spendid Ice Cream caters to trendy tourists types, Mitchell’s is a local place as evidenced by the lines outside the door. 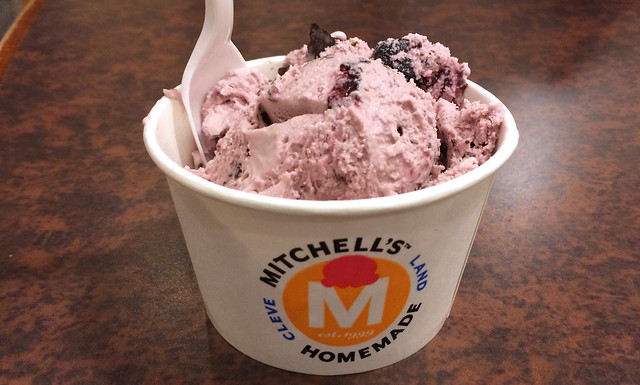 Since I flew late in on Thursday, I tagged along with my brother to his place of work at the Cleveland Clinic the following day. For lunch, he took me to another place he thought I should check out: Sokolowski’s University Inn on University Road. 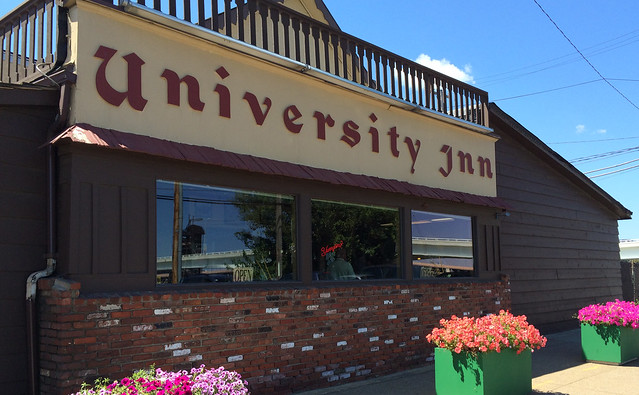 Open since 1923, the cafeteria-style restaurant has been featured on Anthony Bourdain’s show for its Polish ethnic food. Grab a tray and fill it up with whatever looks good from the hot food bins. 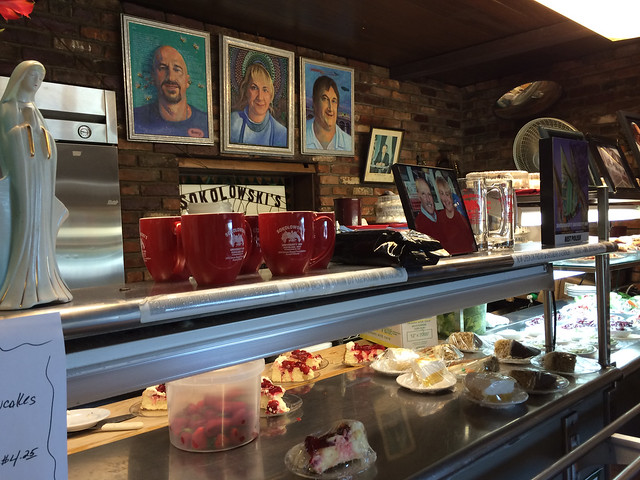 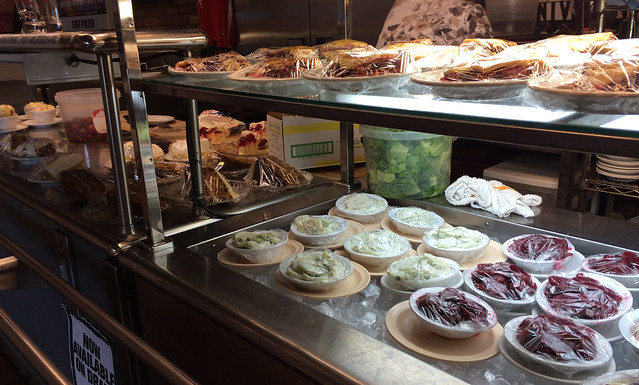 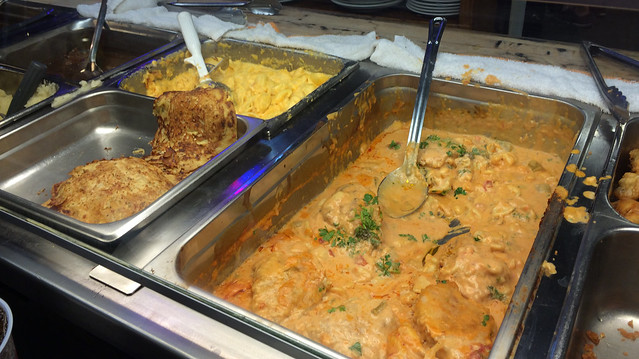 That day, Sokolowski‘s featured their usual variety of salads and cakes. From the hot food bin was chicken paprikash, potato pancakes, mac ‘n’ cheese and fried fish just to name a few. It’s the kind of food that sticks with you all day. 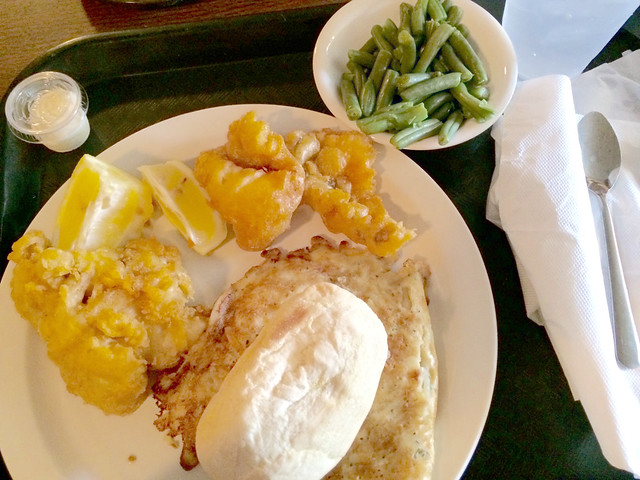 Here’s my fish (an ode to Paul since he couldn’t be with me during this trip) along with one potato pancake, a roll and side of green beans. 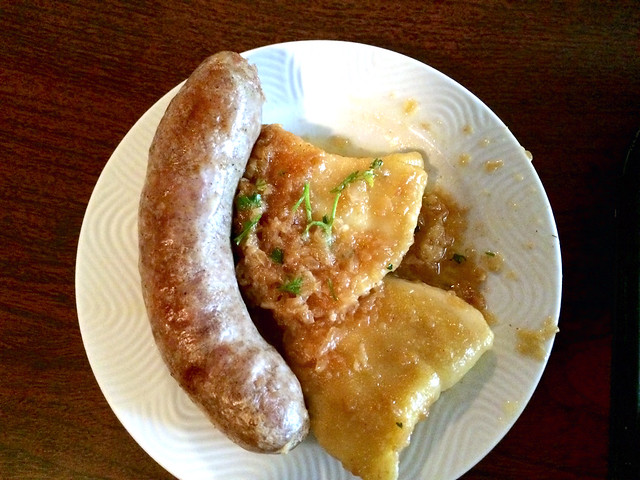 My brother went all out ordering Polish sausage with dumplings (pictured) and I tried a bit of his chicken paprikash. 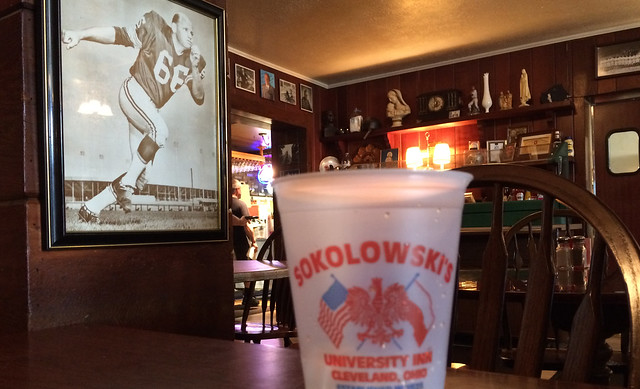 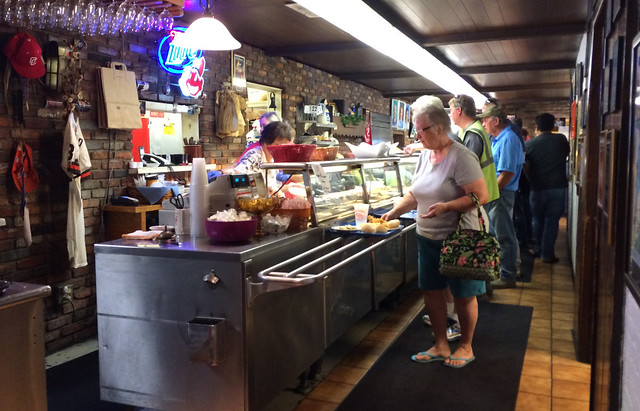 Aside from the food, the decor looked like it was plucked out of time with photos of notable celebrities and regulars on the walls. If you’re in Cleveland, this is a definite must-visit.

One of the things I really wanted to do on this trip was check out the Harvey Pekar banners. They were installed a month earlier at Coventry Park where the late comic creator liked to hang out. After some exploring around in the area in the blistering Cleveland humidity, we found the banners attached to the lampposts at the intersection of Coventry Road and Euclid Heights. 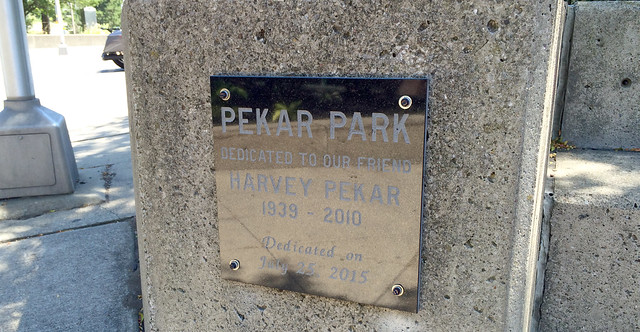 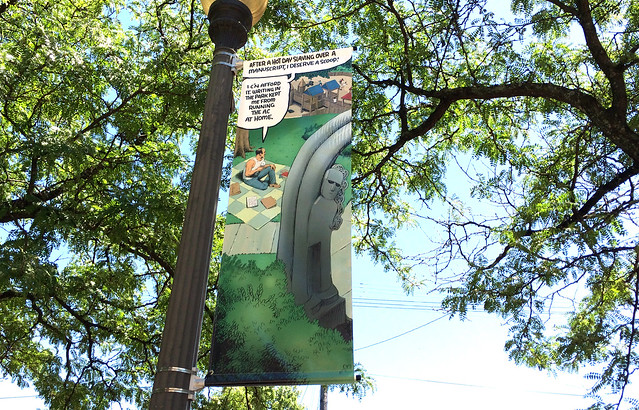 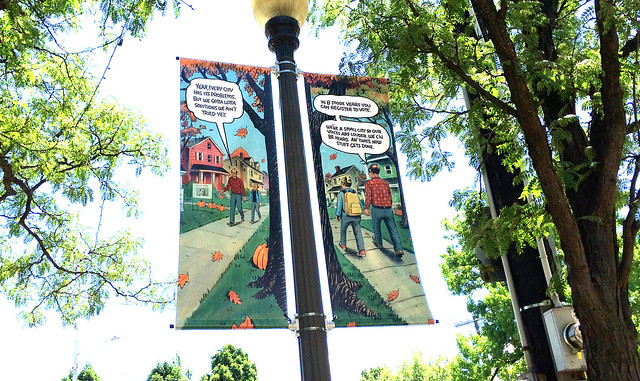 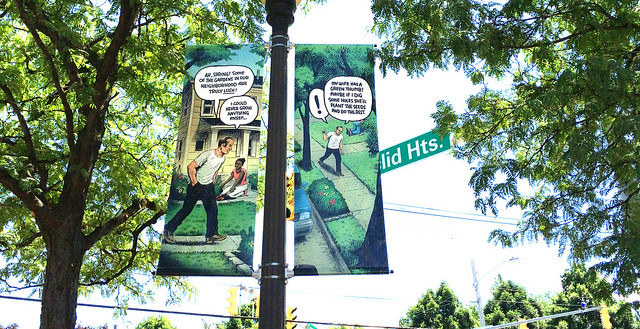 Much of the rest of the weekend was exploring outside of Cleveland. I somehow got in my head that I wanted to find Amish doughnuts. My brother had no idea where to find some so we settled on Lerch’s Donuts parked outside of a small shopping strip in Smithville, OH. They’re known for selling sweets during summer fairs. 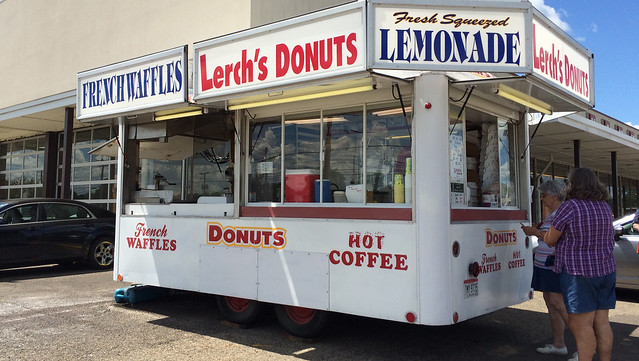 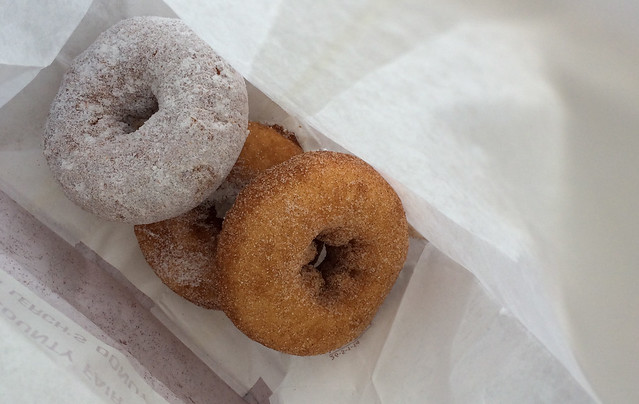 To Paul’s chagrin, I also sought out his beloved Faygo and found them in several grocery stores where they were selling plastic bottles of it at a staggeringly $1 each! 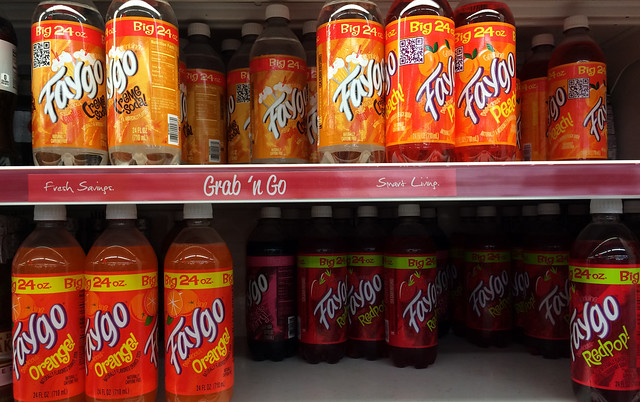 Despite my brother’s misgiving about Jeni’s Spendid Ice Cream, he took me to the scoop shop in Chagrin Falls. Chagrin Falls is one of my favorite places outside of Cleveland. There town is host to gorgeous water falls leading into a stream and also popular because it’s the home Bill Watterson, creator of Calvin and Hobbes. 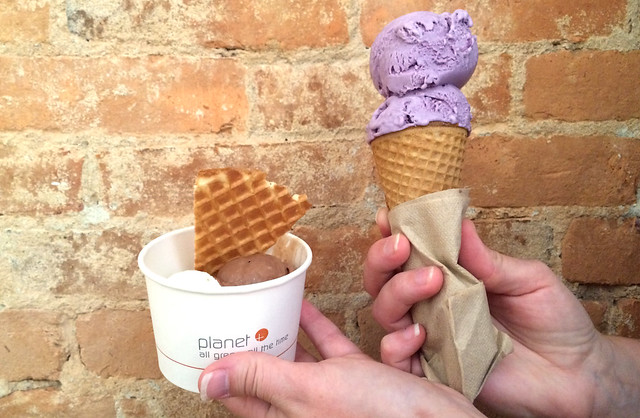 We were unsure if Jeni’s was open (throughout the county, production had stopped several times because of a listeria outbreak) but we were in luck.

Upon suggestion of the counter, I ordered Ndali Estate Vanilla bean with a scoop of milkiest chocolate while my sister-in-law went with a scoop of Wildberry lavender. The ice cream was fine but I have to go with the locals and agree that Mitchell’s Ice Cream is far superior.