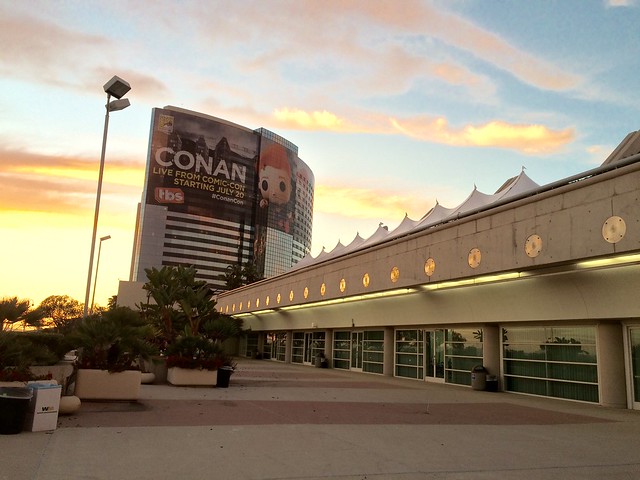 San Diego Comic-Con 2016 is finally over and quite honestly, we’re not sad to see it go. If you were one of hundreds of people who stopped by the table to say ‘hi’ and buy a book or shirt, you likely got a story about Paul’s current medical condition. He has a kidney stone but it’s not that malady which hampered him this year— it was the two stents opening the passage from his kidneys to bladder that caused him the most discomfort these days and two months preceding the event. So he wasn’t his usual chipper self, standing up and talking. Until his surgery to finally remove the kidney stone and stents in mid-August, we’re keeping things on the down low. 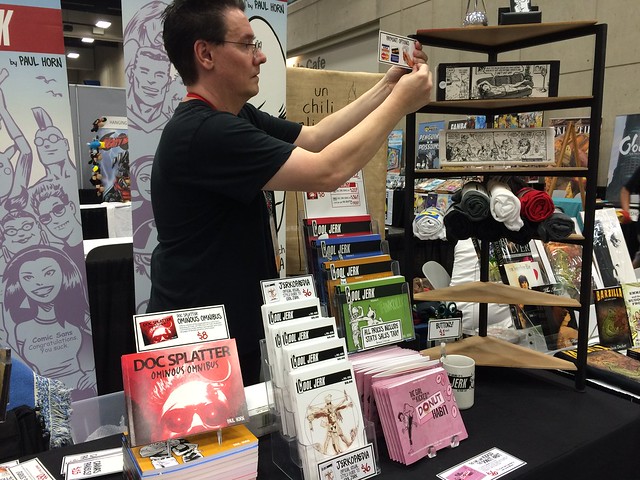 But on to comic-con… I had a new book this year and sold all but two copies that we reserved for the show! We’ve restocked and will add it to the Cool Jerk store soon. In addition, we’re planning for a San Diego signing for those people requesting a copy but didn’t have tickets to the big event. To everyone who I talked to and bought a copy — thank you! I’m extremely touched and so sorry for the sad ending but life goes on. 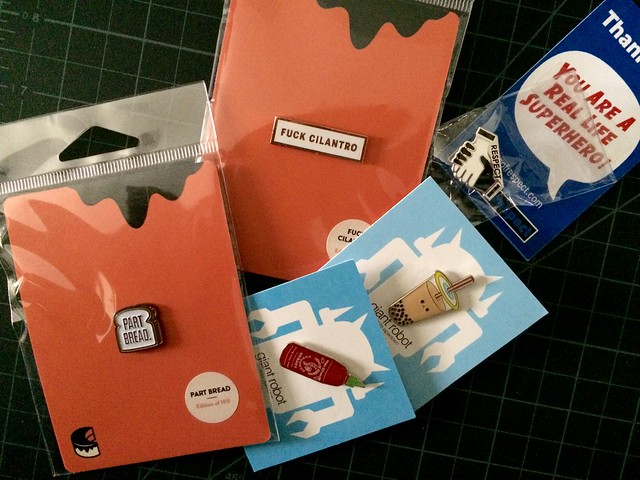 This year I fell hard for enamel pins and bought several for myself. ‘Fuck Cilantro’ was gifted to me by a friend and sold out during the ‘con! I went back and bought ‘Part Bread’ from Night Cake, a company based out of Los Angeles. Those two pins were supplemented with a boba pin and Sriracha pin by Giant Robot. One pin — the handsofrespect.com pin — was designed by Stan Lee and has nothing to do with food. It was priced at $10 for two pins: one for yourself and one that you give to another person. 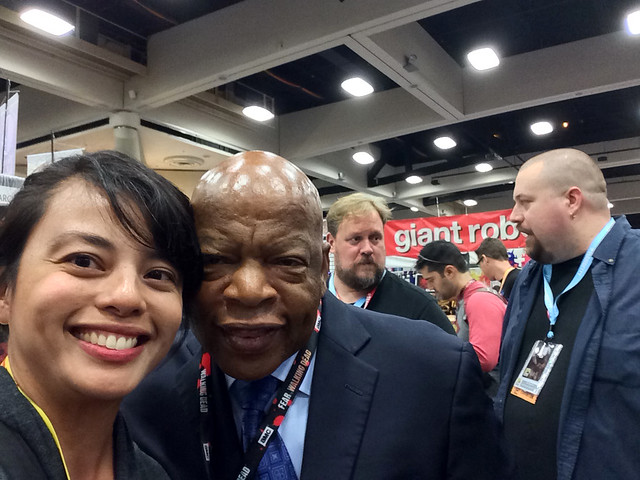 I bought the Stan Lee pin shortly before running into Congressman John Lewis who was there to sign his graphic novel, Bridge, at the IDW booth. It was earlier enough in the day when he wasn’t surrounded by an entourage and we were able to take a selfie. If you don’t know who John Lewis is, do a quick search and you’ll see he’s one of the original superheroes of the civil rights movement. It was quite an honor I tell you. 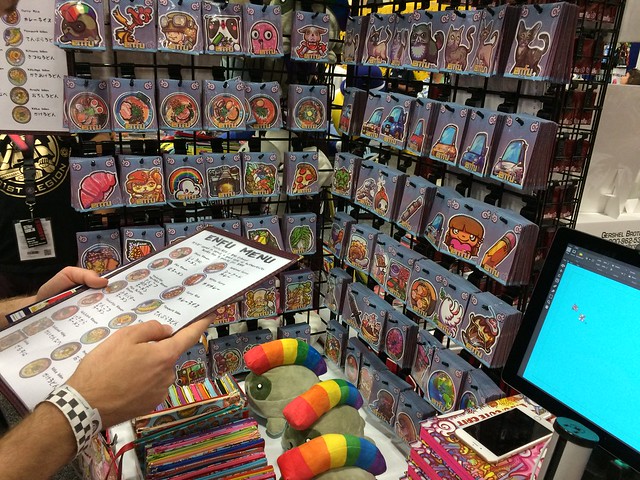 Aside from pins, I was quite taken with a selection of stickers by enfu. The stickers featured doughnuts, slices of layer cake, ramen, sushi, breakfast, etc. There were lots of stickers to choose from and if you wanted to upgrade to a full-sized print, they offered a menu. Clever! 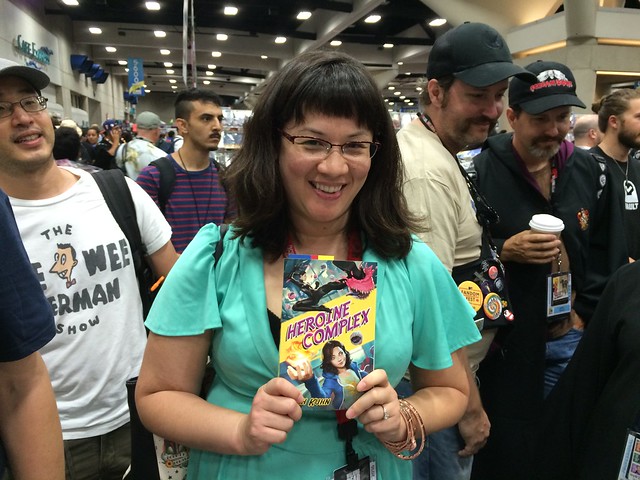 My goal this convention was to get Heroine Complex signed by friend and author extraordinaire Sarah Kuhn. I have so much I want to say about this book because it touches me in so many ways. Aside from the Asian superhero protagonists, super hot sex scenes, food references and nods to fashion, it’s everything I ever wanted in a book where male characters fall to the wayside and strong women are featured front-and-center. I’m slowly taking my time reading this book until the two follow-ups are released next year and the year after. In short, buy a copy! 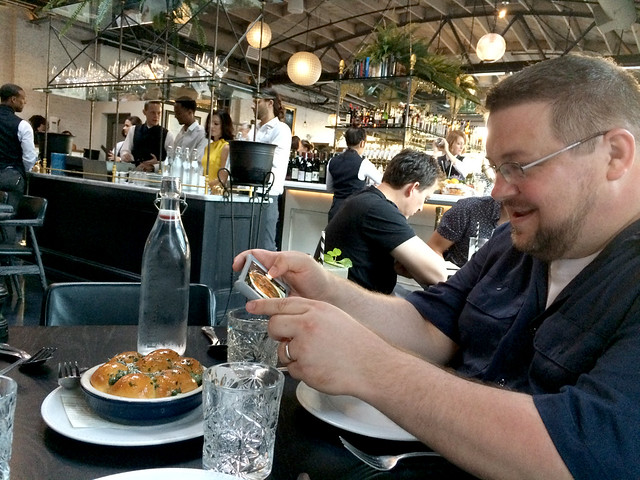 I made every effort to connect with friends outside of the convention center and have a meal with them. On Friday night, Paul and I were graced with a dinner invitation by Marvel’s C.B. Cebulski. I had interviewed him several times over the years but this was quality time over a selection of dishes at Herb & Wood in Little Italy. We all talked comics industry, travel, kidney stones and food while sharing a bounty of small plates, entrées and dessert. 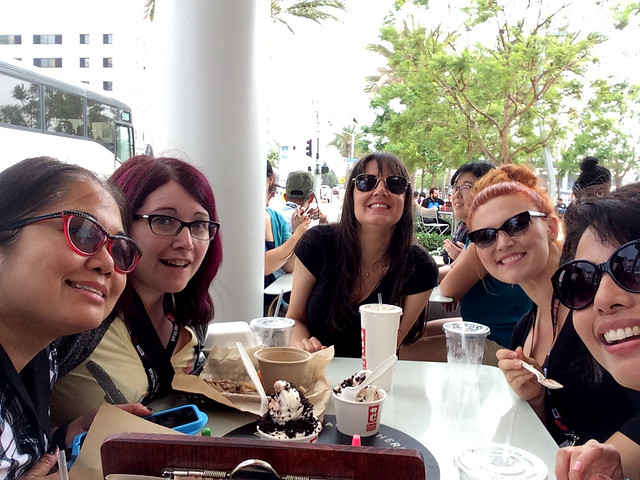 Every comic-con, I have a standing lunch date with some really lovely comic book ladies— Wendy, Angela, Shannon and new girl Sonia. Previous years we hit up Puesto (where we spied Michael Douglas and Paul Rudd going to and from the now-defunct Pizzeria Mozza) and last year’s Double Standard. This year, we went to the new Carnitas’ Snack Shack by the Embarcadero, soaking up the cool air and views— and also hitched a free ride close to the convention center on a trolley tour bus! 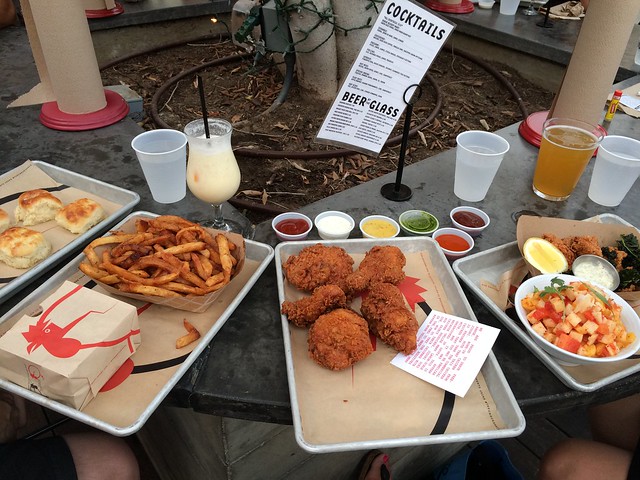 Also becoming a tradition is a post-con dinner with friend, writer and artist Deb Aoki who visits every year to cover manga. This year, she had several panels as well. After the convention was shuttered on Sunday and we washed off all our ‘con stink, we delved deep into fried chicken goodness at The Crack Shack in Little Italy. 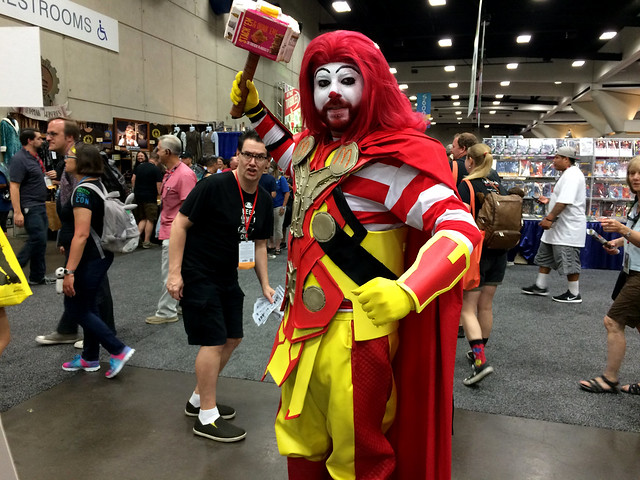 I don’t think any of my comic-con posts are ever really complete without at least one costume photo. In keeping on theme with food, here’s a mash up of Ronald McDonald as Thor with a Happy Meal Mjolnir.