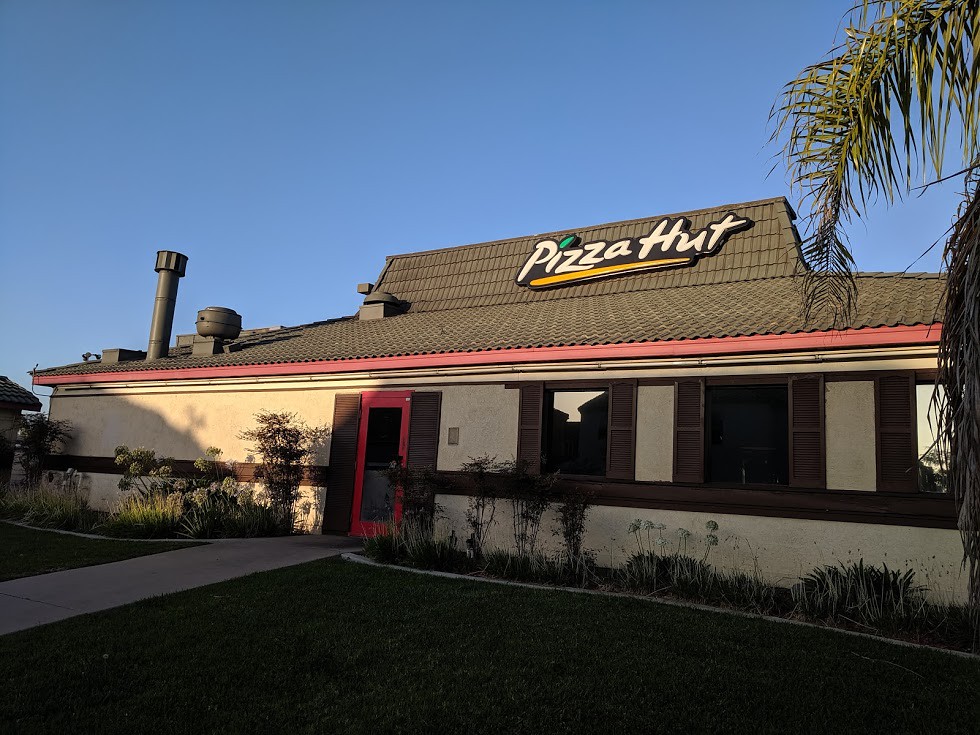 Head to Coronado Avenue in Imperial Beach. This was same spot our family used to frequent in the early 80s and one of my earliest restaurant experiences. My dad would order a pitcher of soda and large pizza to share among the four of us. I haven’t been back since high school, so I decided it was time for me to return with Paul in tow. 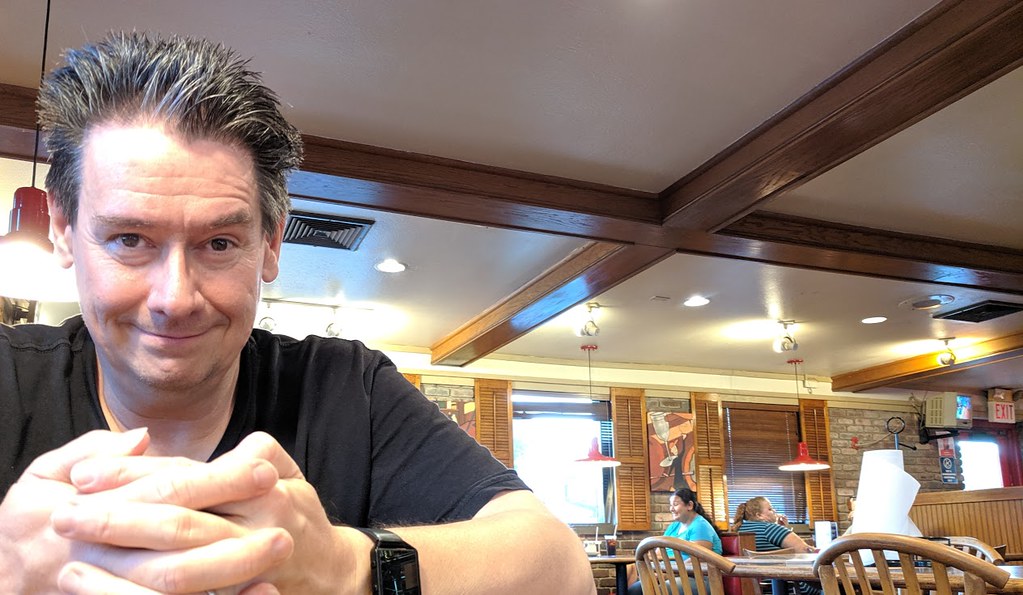 Except for the updated logo, nothing much has really changed. A sole arcade machine with Pac Man, Galaga and other retro games sits by the entrance near the restrooms, and a sign asking you to wait to be seated welcomes guests. The building’s brick foundation also acts to add some character with faux window shutters inside and canvas art panels adorning the walls.

Once seated, even the red cushions at the booth we were seated felt original (I could feel the frame pressing against my butt) while semi-sticky faux wood tabletops and textured plastic tumblers that I hate so much added to the overall character of the restaurant. A new addition I noticed was free wifi courtesy of Pizza Hut. Technology, huzzah! 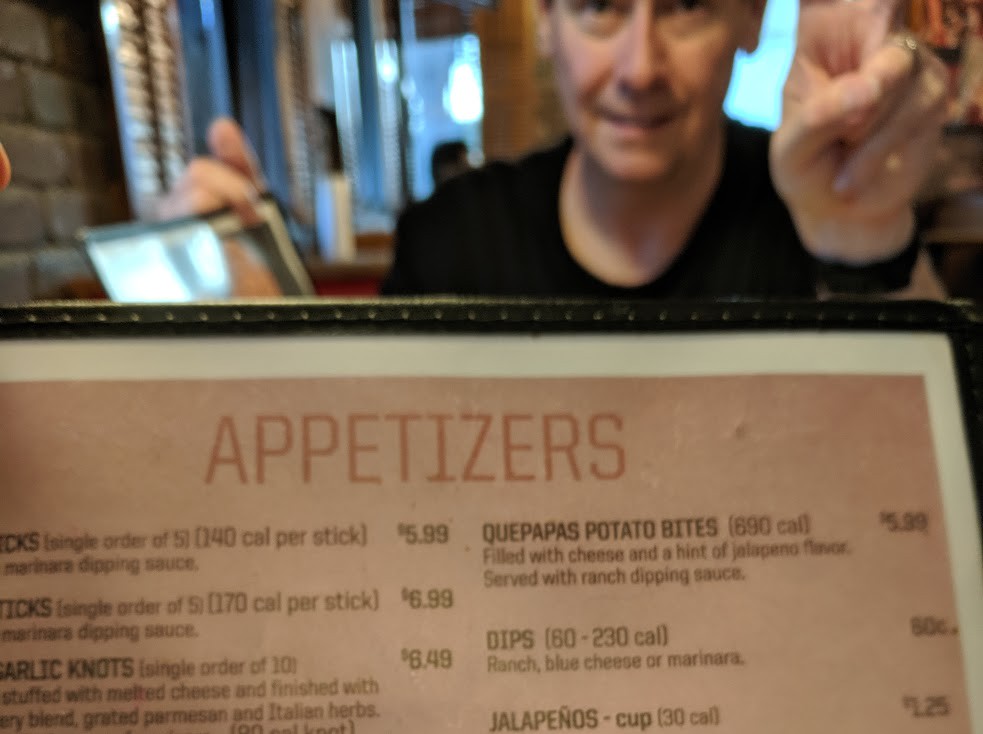 Since I haven’t been to or much less ordered from a Pizza Hut in decades, the menu didn’t seem familiar. The still offered personal pan pizzas (a deal at $4.50 for a plain cheese), stuffed crusts, four types of bread appetizers (plain, garlic, cheese or stuffed garlic knots), dips, baked wings, a chocolate chip dessert creation along with quepapas potato bites— an appetizer described as potatoes filled with cheese and jalapeños. Is this Pizza Hut’s take on potato skins? We’ll never know. 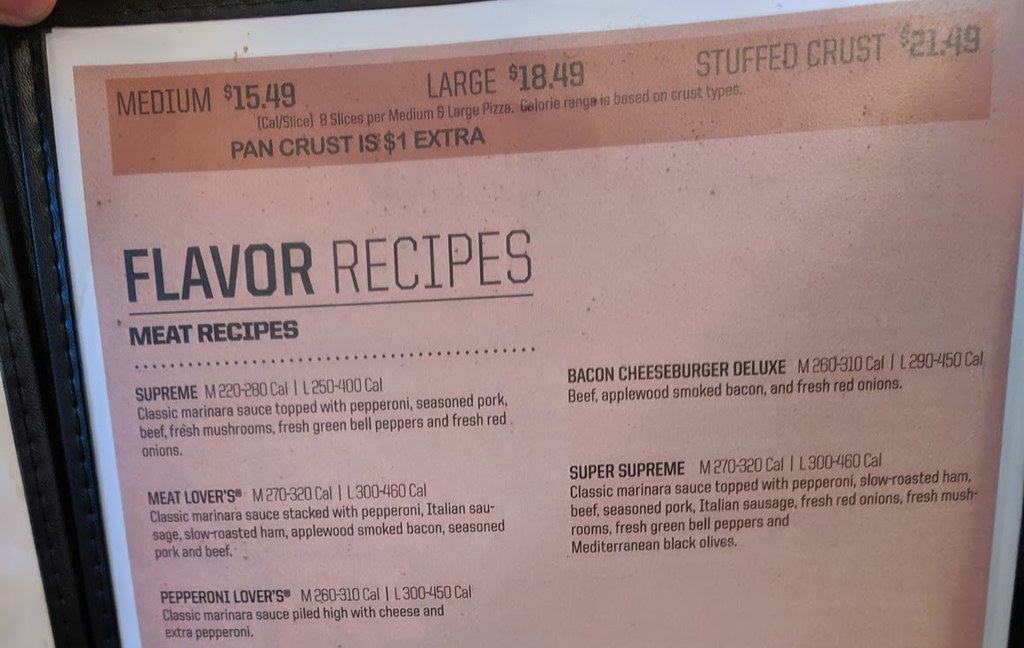 The pan crust option caught my eye (it’s a dollar extra) and we tacked it onto our usual custom pizza order (sausage, black olives and mushrooms) plus plain breadsticks for good measure and just in case the pizza took too long to bake. 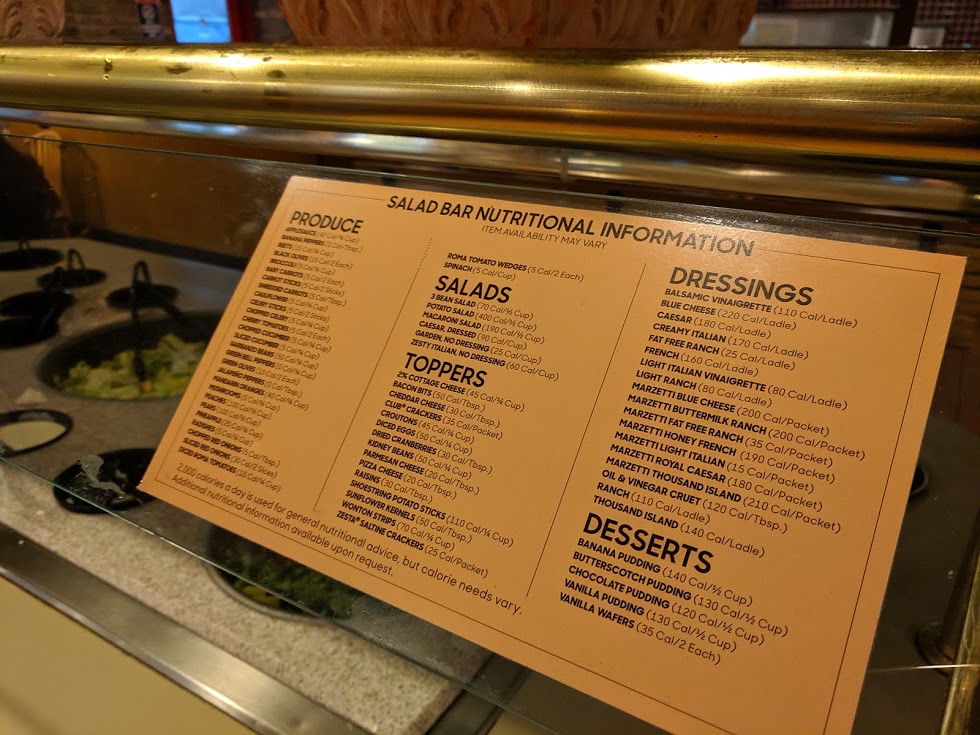 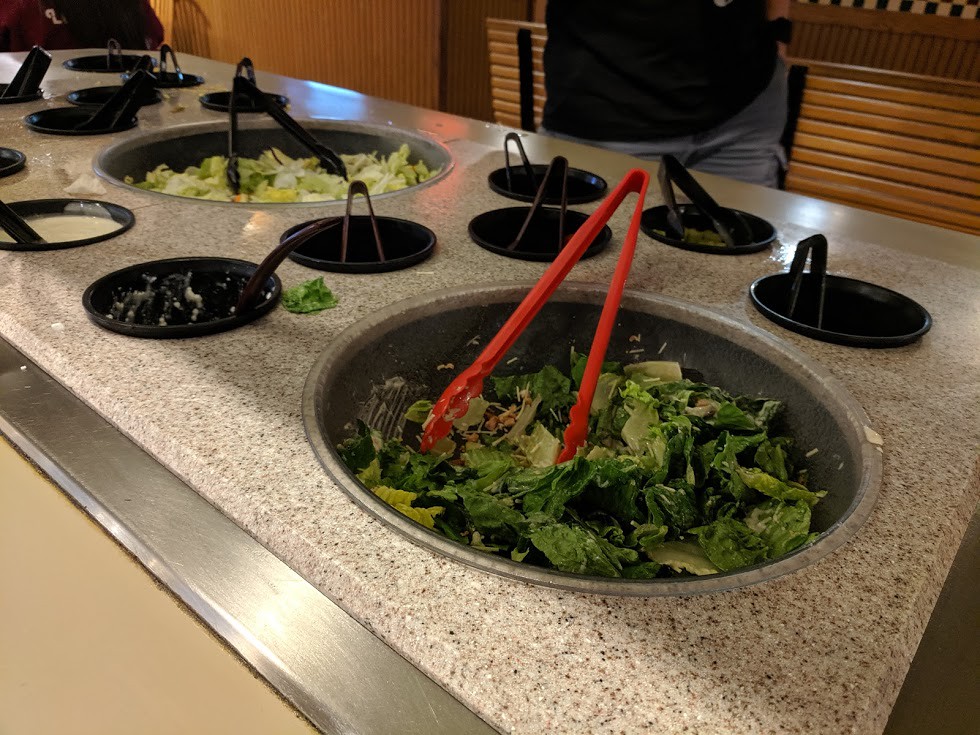 Our order didn’t take long but while we were waiting, I noticed the salad bar anchoring the middle of the dining room and other guests doing repeat visits. (The unlimited salad bar is $6 or $4 for just a side.) 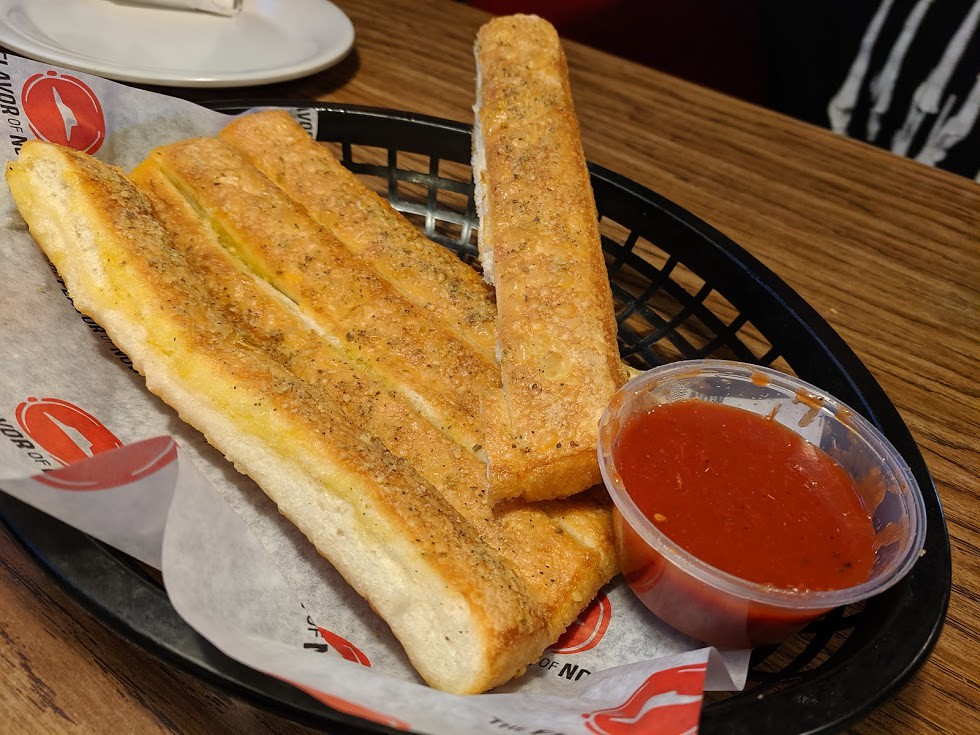 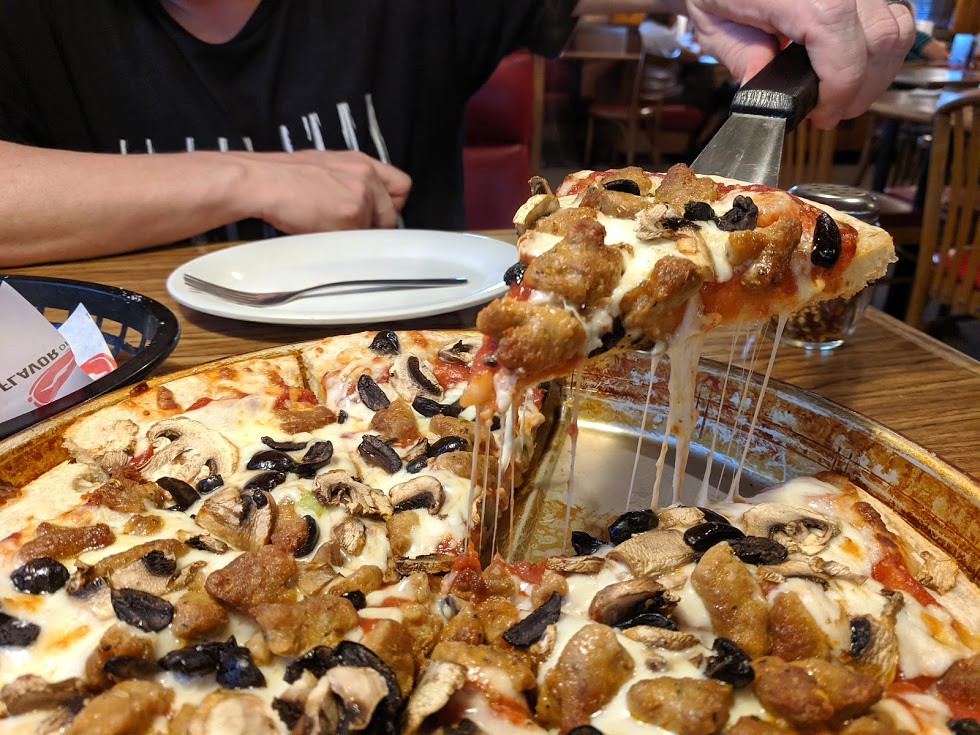 The breadsticks with a side of marinara came first followed soon after by the pizza. First things first. Paul and I noticed the pizza wasn’t swimming in oil like we remembered from our youth. Also the pizza dough was a lot blonder instead of golden brown around the edges. We attributed the lack of oil dripping own our arms as we ate to the absence of pepperoni. And I swore the pan pizzas used to be baked in a cast iron-like pan. As for the unsettlingly pale dough, it didn’t affect the taste. The pizza was actually better than we hoped for despite the awfully scary Yelp reviews and it wasn’t a far stretch from the pan-style pizza I make at home. 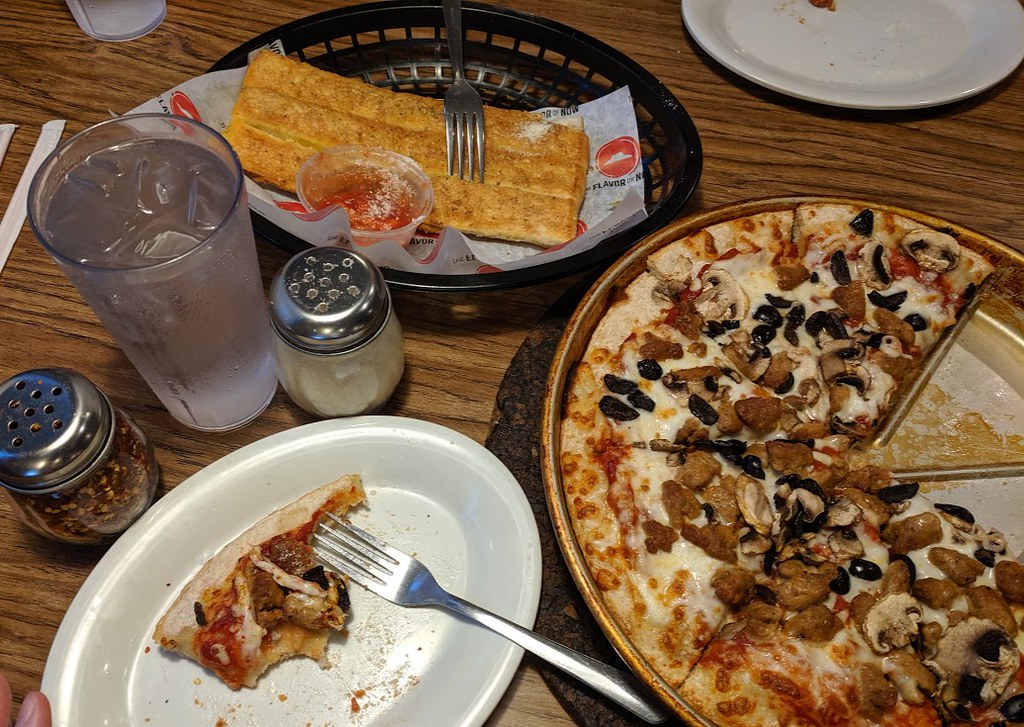 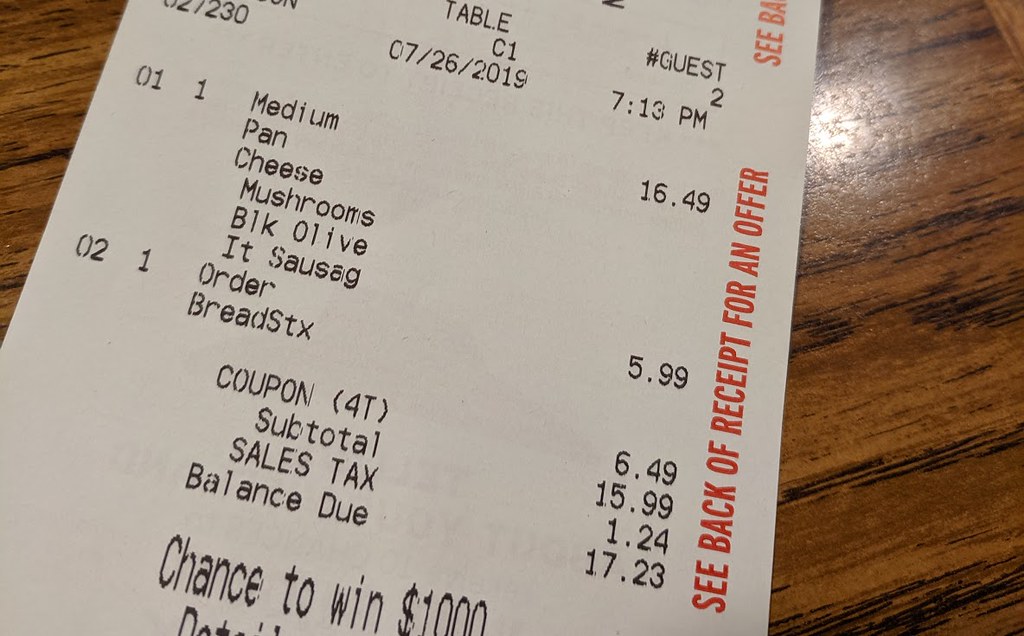 While the pizza could offer a more satisfying crunch, the side view of each slice yielded a tall, airy crust. Honestly, we couldn’t find any fault with it. The pizza is much better than Papa John’s and Little Caesar’s and on par with Domino’s and Round Table. It’s just a regular pizza with no extra bells and whistles. And for the price, we spent well under $20— worth the trip to Imperial Beach.

(NOTE: we didn’t bring in a coupon but somehow we received a $6.49 discount. A mystery for the ages.)

As for the building itself, former Pizza Hut buildings still exist if you look hard enough but they’ve been taken over by other establishments.

One thought on “A Bygone Era: Full-Fledged Pizza Hut Restaurant”