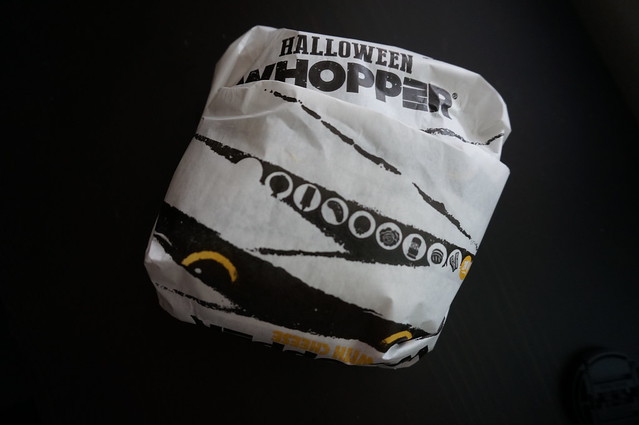 Note from Darlene: I’ve been busy so I wrangled Paul into eating this burger and writing a post for me. If there’s one lesson to be learned, lunch is never free with me.

Not in a “Happy Halloween” way, but in an opposite of “yay!” way. 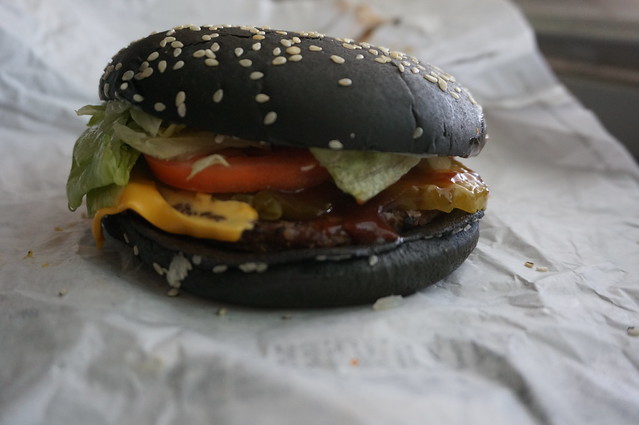 Burger King unveiled its HA1loween Whopper locally this week, and for those keep tabs on international fast food offerings, it seems to be a far cry from its Japanese model from 2014. Here’s my breakdown from the American version vs. its overseas counterpart.

Aside from the nifty packaging that resembles a mummy, the first and most obvious deviation from a regular Whopper is the light–diffusing, black bun. Advertisements claim it’s infused with A-1 steak sauce. Other than its color, it seemed to be the same regular-issue sesame seed variety that comes standard with any Whopper (I didn’t notice any pronounced A-1 flavor). The Japanese version didn’t have sesame seeds, so it had a much more pronounced blackness. (If I’d ordered mine without lettuce, tomato or onion, it would’ve been much less colorful.) 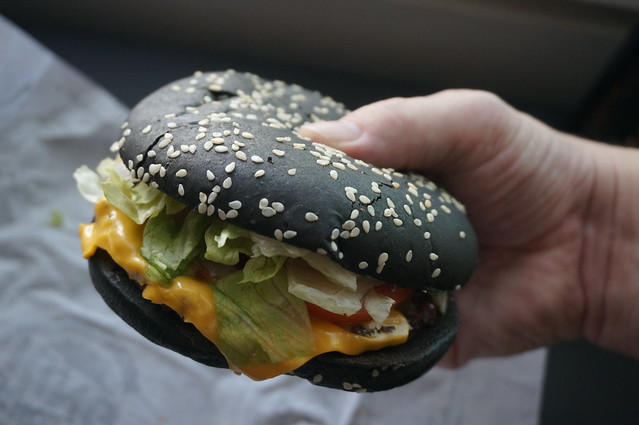 The next deviation from its Japanese predecessor was the presence of A-1 steak sauce in place of ketchup. Apparently this was to echo the darkness of the bun (?) but it didn’t make the burger taste any better. I’m not sure if A-1 and mayo make good bedfellows. (Darlene reports when she ordered it, the fine young man behind the counter warned her that there was no ketchup and if she wanted steak sauce or ketchup. Customers had been complaining they didn’t like A-1 in their burger.)

The final deviation was the slice of American cheese. It was the standard yellow-orange you’ve always had, opposed to the Japanese version’s black cheese. Perhaps American focus groups just couldn’t handle that. I think seeing the words “squid ink” on a Burger King menu in Oklahoma or Indiana would incite panic, mass confusion and rioting. 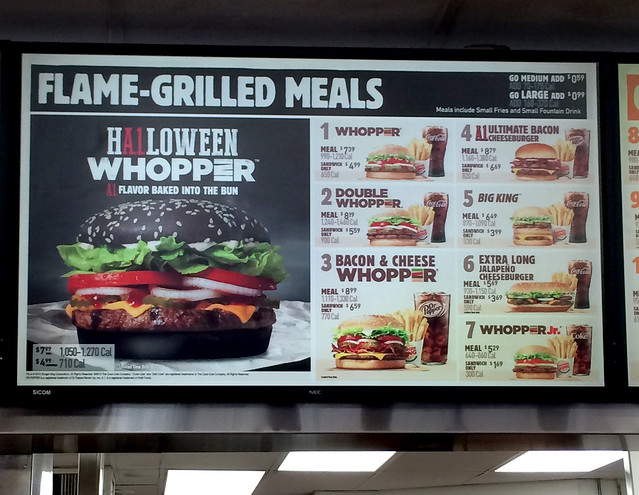 All in all, the burger tasted the same as any other Whopper, but for the A-1/ketchup swap. This is a good thing; I’m not sure if a radical departure in flavor would be a good idea for those curious in trying this novelty. The price was $4.99, which is the going rate as a regular Whopper a la carte or $7.39 for the combo meal.

Since it’s for Halloween, I would imagine this is one of those “only for a limited time at select Burger King locations” sort of deals, so if you need to get one, act sooner rather than later.