David Lynch’s Twin Peaks reboot on Showtime launches tonight and Paul is beside himself with a strict lockdown to avoid any spoilers. Back when the series originally launched in 1990, he watched every episode, buying books related the show and even making a trip up to Seattle to visit the Double R Diner for a slice of the infamous cherry pie. (The diner had a strict 24-hour pre-order policy.) While I never made it past episode 5 and only watched the movie “Twin Peaks Fire Walk With Me,” I have an appreciation for what Twin Peaks brought to pop culture. Twin Peaks paved the way for Lost, Riverdale and food-wise, an appreciation for coffee, doughnuts and, of course, pie. 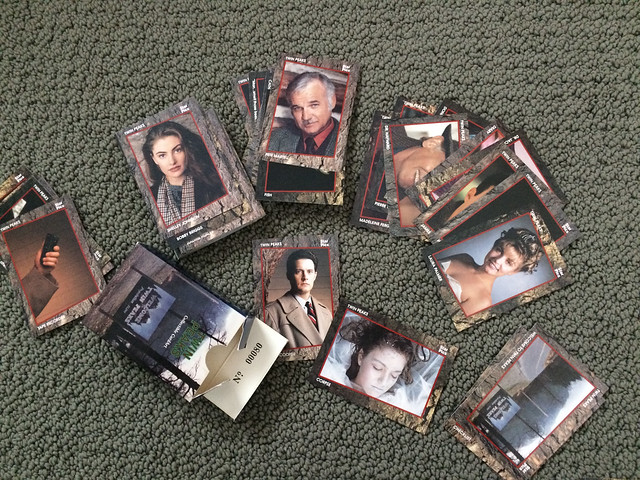 In going through Paul’s Twin Peaks stuff, I found a stack of trading cards by Star Pics. Each one is numbered on the back with trivia about the character, place or item. Card seven is devoted to cherry pie with a recipe on the back.

I can only assume it’s supposed to be the recipe by Norma Jennings, the owner of Double R Diner, played by Peggy Lipton aka mother of the fabulous Rashida Jones. Despite the directions being kind of willy-nilly calling for a lattice crust top while the front of the card clearly shows a plain top crust, the cherry pie recipe is pretty unique to the set of cards. There’s even a card for a cup of coffee with a quote from dreamy Special Agent Cooper, “The true test of any hotel is that morning cup of coffee.” 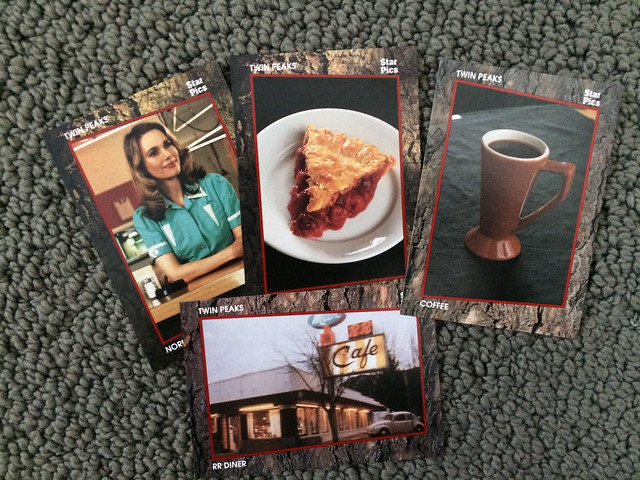 Mix flour and Crisco with fork. Add ice water and mix with your hands.
When blended, roll into ball and refrigerate overnight.
To roll out: Flour both rolling pin and flat surface, split ball in two. Roll out 1/2 to fit pan and 1/2 for lattice.