Every fall and winter season, I like to nest and take on one big home renovation project. Since moving here, we’ve bought and assembled a storage bed, added a bunch of shelves and upgraded the tub and shower in both bathrooms. Part of taking on home projects is attributed it to the cooler weather but my my freelance schedule is also less busy. Last year, we transformed my office.

The largest bedroom is the master and upon moving in five years ago, we reserved the second largest room as office space. We shared the office for a while but in the end, concluded that it was best we had our own separate work spaces. I like to watch pet videos to break up my work routine and Paul has a lot of conference calls. You get the idea.

When we moved my desk to the small bedroom, the immediate problem was space. One end of the desk jutted up against the closet door while the other end was against a bookcase.

Goal last year: convert the closet into a desk space. It was an unused space— the sliding doors always seemed to be coming off the rails and the floor of the closet had a weird angle to make room for the stairwell.

I did a lot of research on similar transformations and when we finally decided to go ahead, we called our favorite handyman to work up some shelves for us. 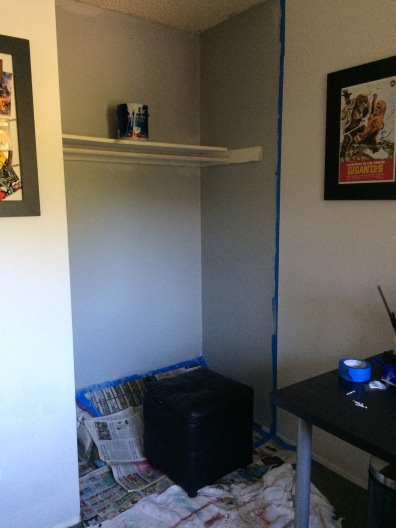 The first few steps were the easiest. The sliding closet doors, hanger rod and shelf were removed. We patched up the spots, covered up the carpet and painted space a matte black to create a visual separate space from the rest of the room that was painted light gray.

Skov came in and measured out the area. Part of the project was to add a power outlet inside the space for my laptop, lights and the printer. The adjacent wall had a power outlet which would have worked but I didn’t want to accidentally trip over it. Instead, he pulled power from the adjacent outlet for the new one in the closet. Simple!

Painting was left up to me and I painted the shelves black to match the rest of the closet. Skov added a trim to the shelves.

I initially started looking for a task lamp to light the space but ended up with LED strip lights that I added to the bottom of two shelves. It’s bright and doesn’t take any desk space.

And that uneven floor? It’s a footrest.

My next jobs I need to tackle (and save up for): the kitchen.

Related: Home Renovation: What Was Left Behind

One thought on “Office Transformation: From Closet to Closet-Desk”