Catch up the first part of the trip here.

After a full night’s rest, Paul and I were revving to spend the entire day exploring. Unlike the previous day with scattered sprinkles, Saturday started off cloudy but we eventually saw the sun peeking through the clouds.

We opted to skip eating at Palmer and headed to Anchorage for our first meal of the day at Moose Tooth Pub and Pizzeria.

This trip was on my radar last year and was on the top of my list of places to eat. It’s consistently listed as one of the top pizzerias in the U.S., and a few years ago Trip Advisor even listed the spot in the top three. Impressive!

We arrived at Moose Tooth a little before they opened and already saw one couple waiting outside the restaurant taking photos. Obviously tourists like us.

We decided the best option was to choose a pizza with half of my choice and half of Paul’s. Since we were both hungry, we ordered a medium split  into Amazing Apricot for me and Call of the Wild for Paul. 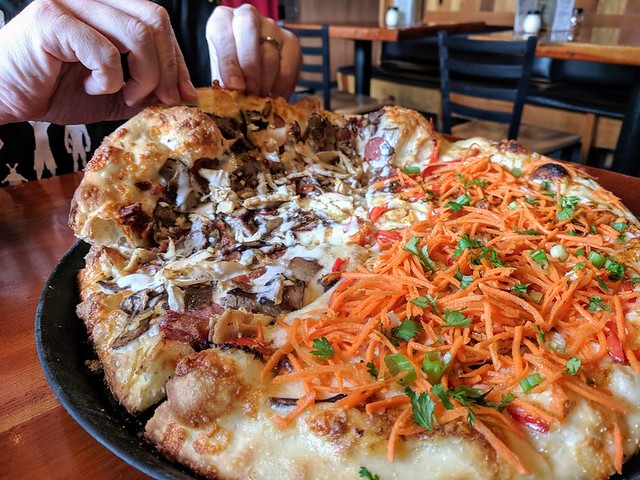 Once delivered, the division between what I ordered and what Paul ordered was clearly evident. The Amazing Apricot came topped with loads of shredded carrots hiding blackened chicken, cream cheese, apricot sauce, red peppers, cilantro, mozzarella and provolone cheese.

Paul’s side was a meat-palooza. Reindeer sausage, steak, bacon, garlic cream sauce, mozzarella, provolone, garlic oil and two kinds of mushrooms (portobello and cremini) crowned his half. Adding to the meats was Paul’s decision to add chicken replacing the red peppers and green onions.

I was slightly hesitant about Amazing Apricot but it surprised me. Red peppers added a bit of welcome heat and the apricot sauce (which I think is some kind of preserves) didn’t overwhelm the pizza. Slightly sweet, slightly spicy, slightly creamy in every bite.

We swapped bites despite Paul’s insistence that apricots make him want to barf and I found his choice equally as good. No surprise that was very meat forward with the mushrooms adding an earthy bite. What really made both pizzas was the rich, bubbly crust. 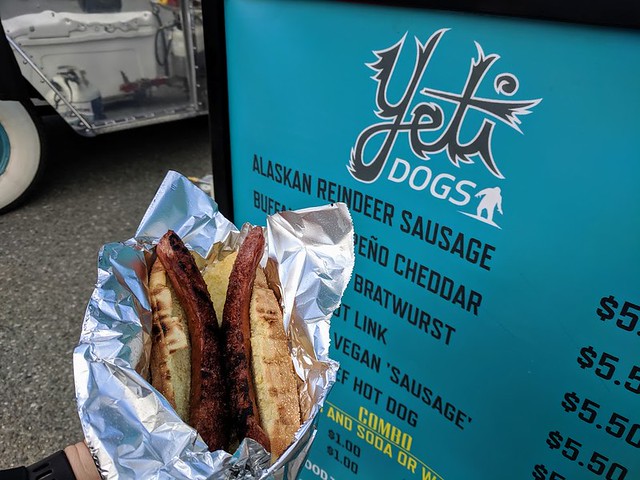 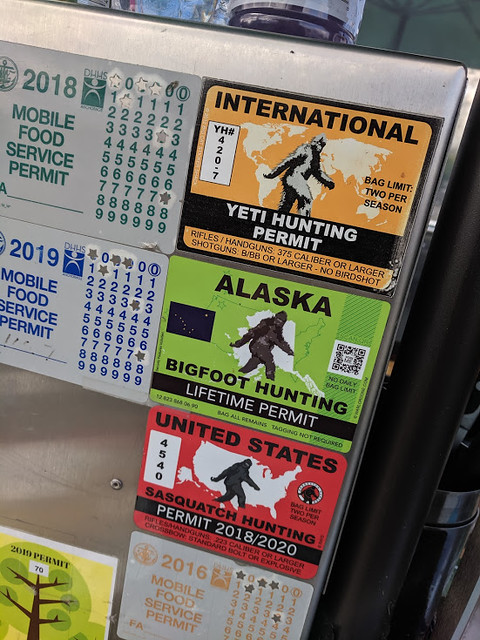 After lunch we still had a lot of time to kill before our next and most important appointment so we headed out to explore the more suburban parts of Anchorage. Our travels included Bosco’s comic book shop to drop off some of Paul’s Cool Jerk books, a visit to a tiny farmers market where we split a reindeer sausage (a business that really took the Yeti name seriously to Paul’s delight), and a return to Captain Cook hotel use their facilities.

Eventually we headed south on state route 1, the same long highway which going north also takes us to Palmer. The sun was really starting to shine as we admired the coast of Turnagain Arm. 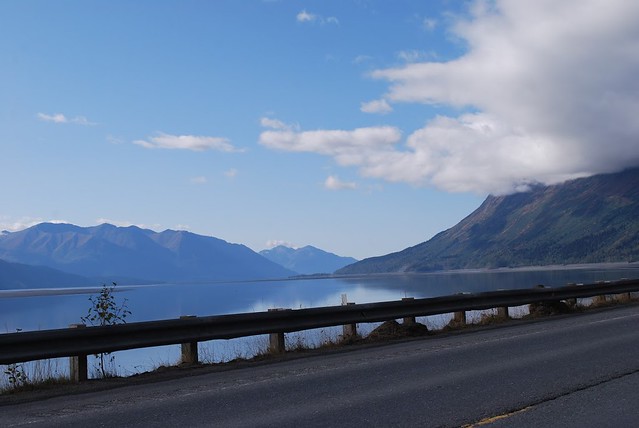 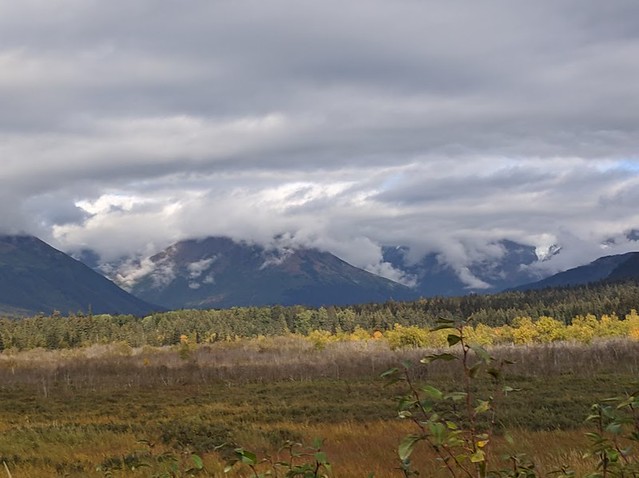 We along with several people made stops to take photos and breathe in the fresh air. Photos of the drive and the scenery really don’t do it justice.

Our drive led us to Alyeska, specifically Girdwood, for our helicopter tour at Adrenaline. After explaining to the operators last year that we weren’t in Alaska and couldn’t take the ride because of the family emergency, they honored our reservation if we used it within a year. We were finally here.

This was both our second ride in a helicopter but our first together. Paul’s was for work in a police helicopter and mine was overseas in Sweden. After signing waivers and a safety lesson such as don’t approach the helicopter from the back and stressing to us the doors can’t handle our weight, we finally took off in a tiny helicopter. Breathtaking doesn’t even begin to describe the views. 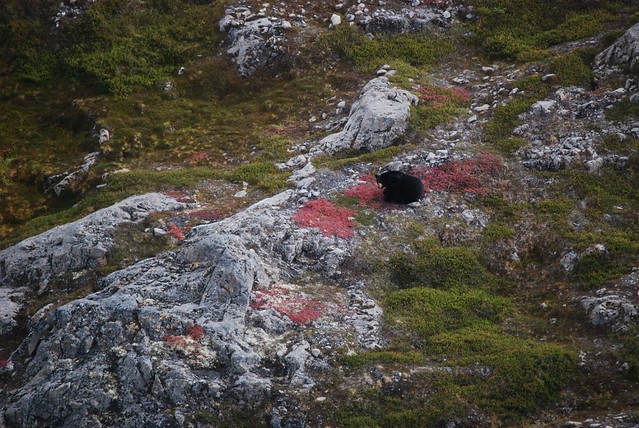 Upon taking off we were warned we may not see much wildlife. The couple who had an appointment before us only saw a bird. Lucky us, we saw a black bear almost immediately. According to our pilot Martin, the cub was less than a year old and as soon as it saw us because climbing to avoid us. We didn’t pursue by helicopter since it was considered harassment. Soon after, we saw another one on a mountain top just lounging. 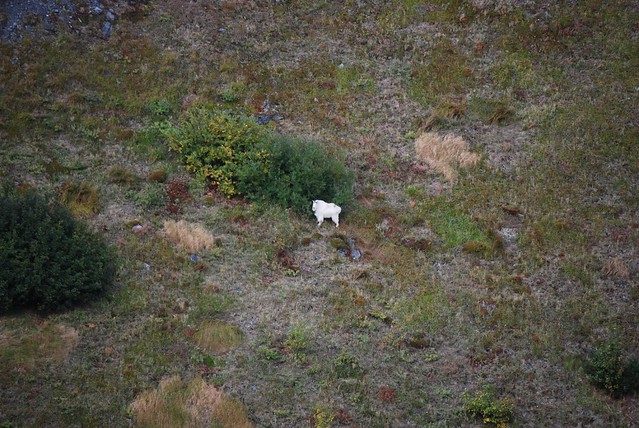 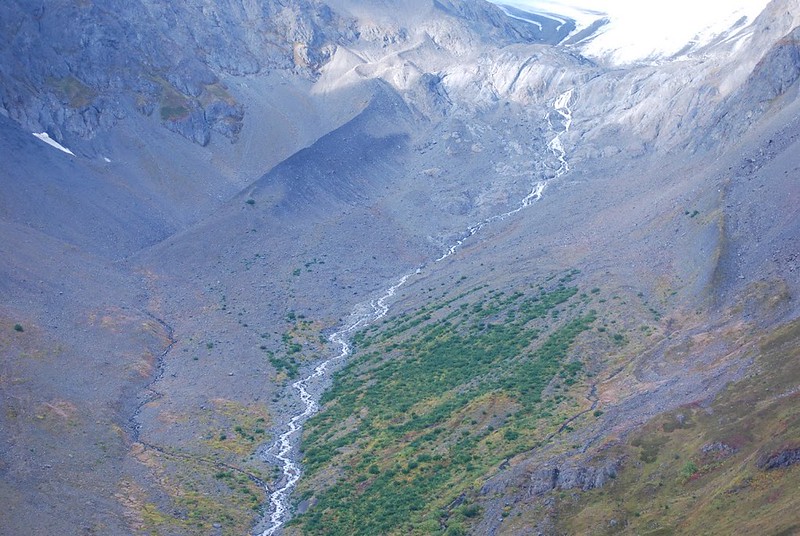 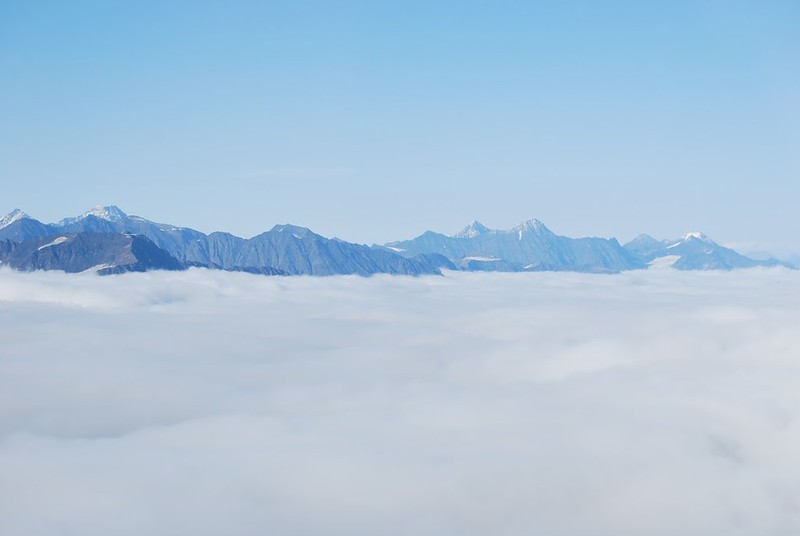 Also around the same time, we saw mountain goats. The scenery also began to change from lush forest, to craggy mountain tops and the helicopter began to go higher and higher. Martin asked us to guess how fast we were going. Paul guessed 45 MPH but we were going sometimes as fast 145 MPH and Martin described the helicopter as a Ferrari, small and fast. 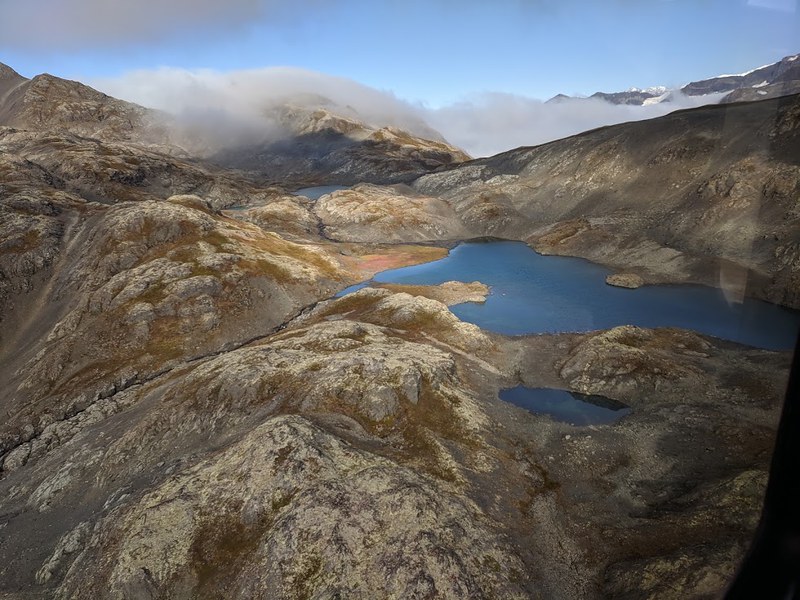 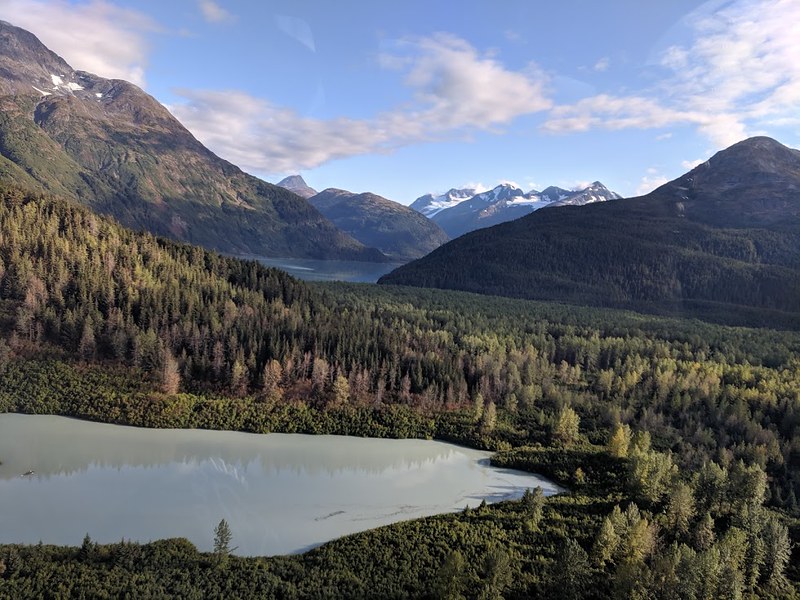 Both of our fears of heights kicked in. (I had Paul sit in the front seat and thankfully I had a bar to grip in front of me where he had nothing.) When we crossed a mountain ridge and suddenly there was nothing below us for thousands of feet, we both silently freaked out. 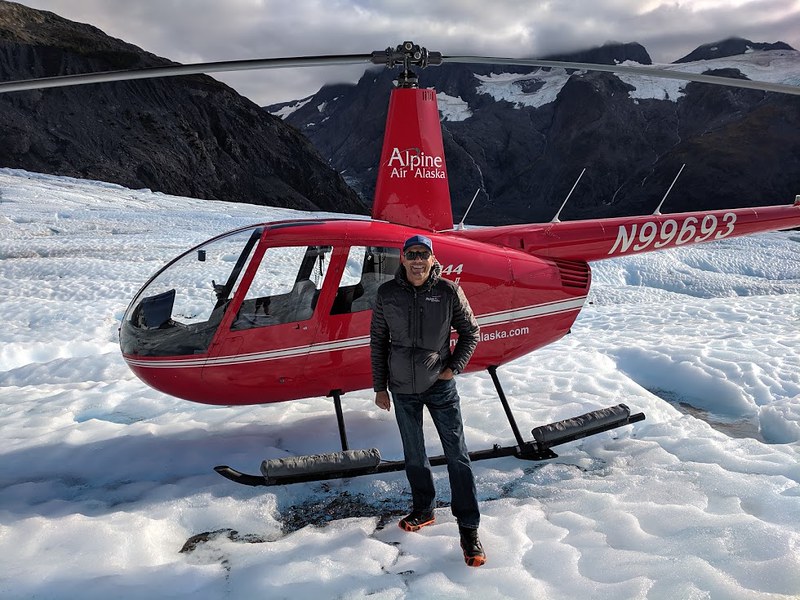 Part of the hour flight was a landing on a glacier, and as we crossed several icy patches, we finally touched down on Twentymile Glacier. Landing was fine and before we stepped out, Martin attached rubber cleats to our shoes to prevent us from sliding down the glacier into Prince William Sound. 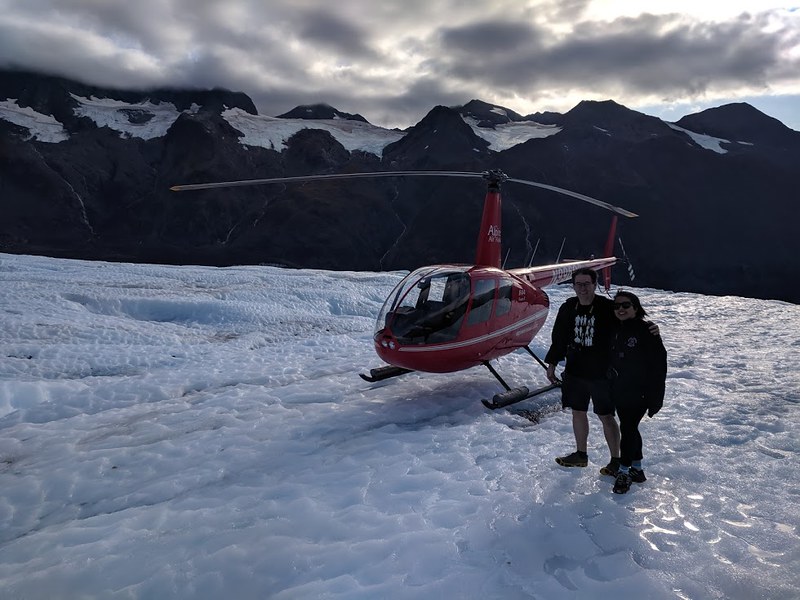 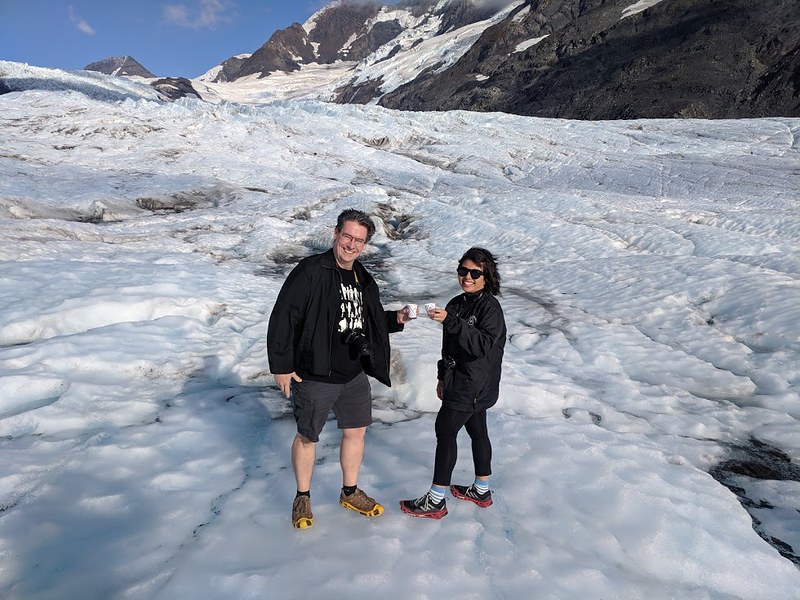 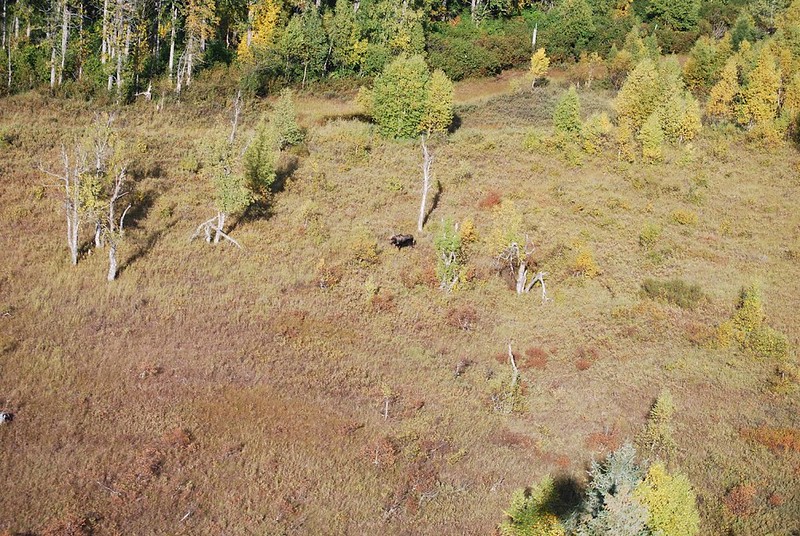 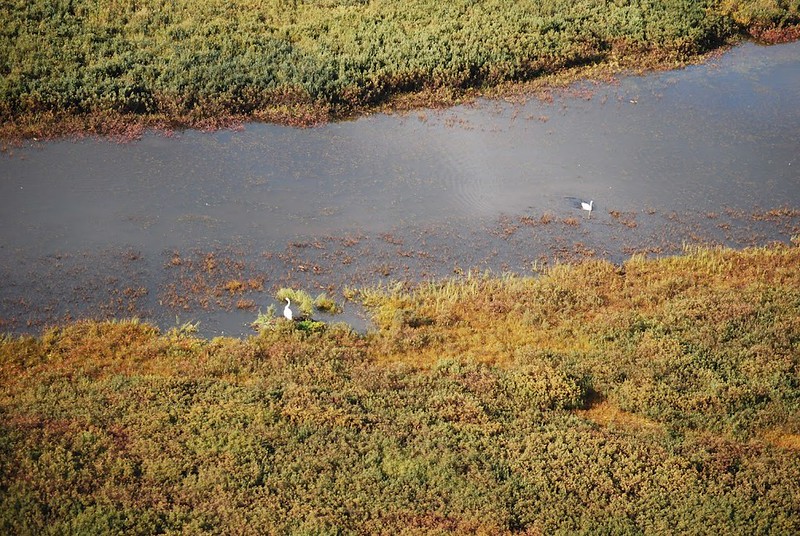 Paul let it be known that he was slightly terrified of heights and on the way back to the hangar, Martin took an easier but scenic route back. Flying over the marshes, we saw two female moose, a pair of trumpeter swans and a beaver dam. We flew over some bald eagles, too. We saw all the important wildlife. (Martin said wolves aren’t native to the area.)

After the helicopter ride, nothing could really top it. We wandered around the area before deciding to check out Double Musky Inn based on someone’s recommendation at Alpine Air. The place was busy. At the bar we ordered peppered steak tips plus fried crawfish, a few specialities at the restaurant specializing in New Orleans fare. The excitement was just too much and squelched our appetite so we headed back to Palmer for the night. 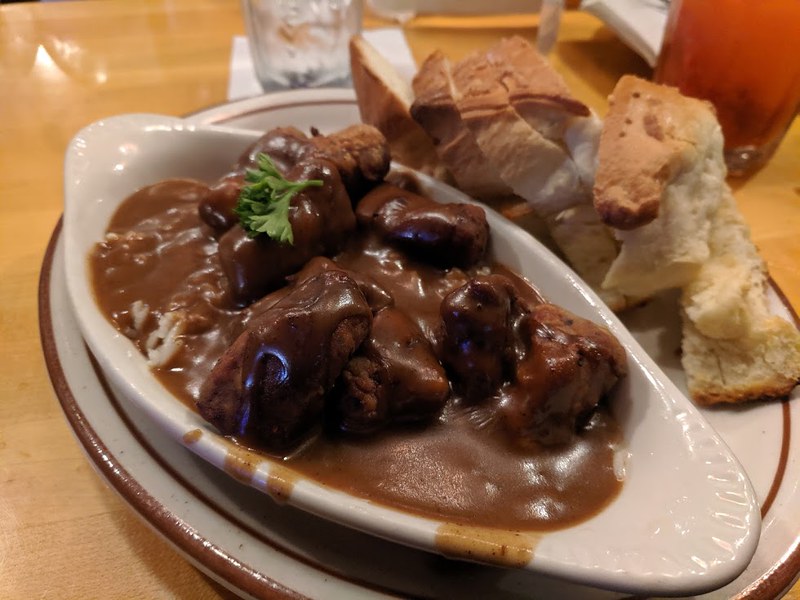 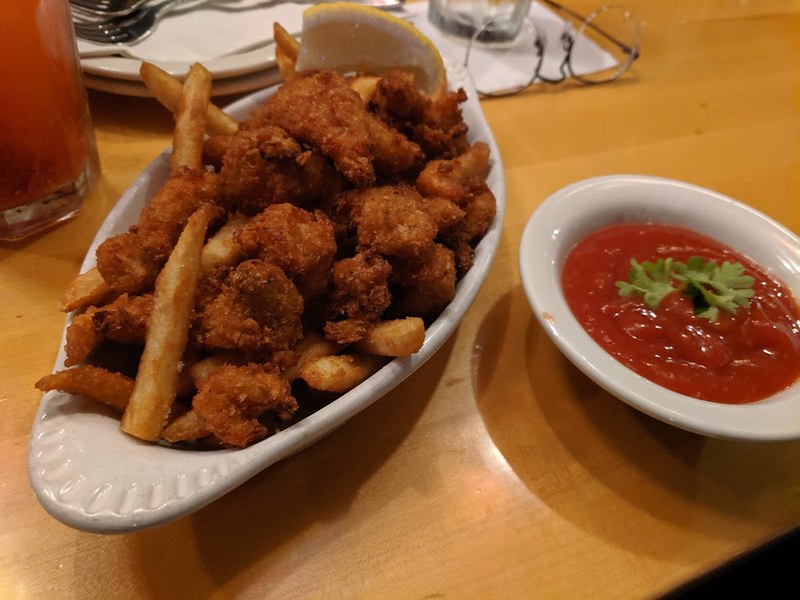