Turn it back almost a year and we were prepping for Paul’s 50th birthday with a trip to Anchorage, Alaska. Then the Rover sitter lost Doctor. Between panicked calls and crying my eyes out, I somehow managed to call Travelocity to tell them about the emergency and because of the travel insurance, I was able to recoup one leg of the the flight, the car rental and our lodging. What we weren’t able to get refunded was the second leg of our flight and the helicopter tour.

Thankfully this past August, I remembered that I had a year to use the credit or lose it forever. In monetary terms, that was almost $500 in Alaskan Airlines credit and, gulp, almost $800 for the helicopter tour. Hey, it was Paul’s big 5-0. Go big or go home, right?

So I reluctantly started making plans, not feeling quite ready to hand Doctor off to a boarding facility for a few days but I knew I had to get over this mental hurdle. Our new, revised plans weren’t far off from last year except we were taking red eye flights to and from to save a few pennies. 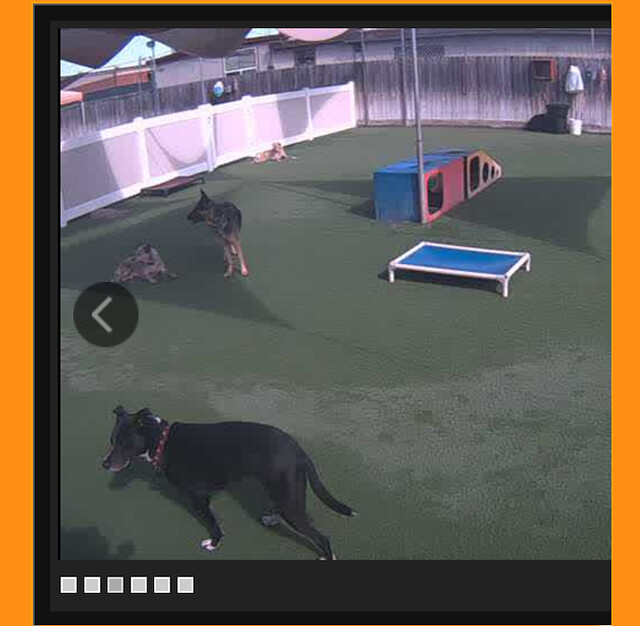 On the day of the trip, I dropped Doctor off early and checked on him throughout the day on the many cameras available at the boarding place while prepping for the first leg of our trip. I would continue to check on him on my phone while we were in Alaska.

With a scheduled departure time of 7:55 PM with a connecting flight in Seattle at 10:55PM, we were due to arrive in Anchorage at 2:10 early the next morning. Things didn’t work like clockwork. Our plane was on the tarmac for almost 2 hours in Seattle and we missed our connecting flight. I was on the Alaska Air app while we still on the tarmac that I was able to get us on the next flight to Anchorage.

We finally landed at 3:30AM. Not bad except the car rental place closed at 2:30 (our original plan to run to the rental car counter before they closed). Instead, we were were forced to sleep at the airport until the car rental placed opened at 5:30. 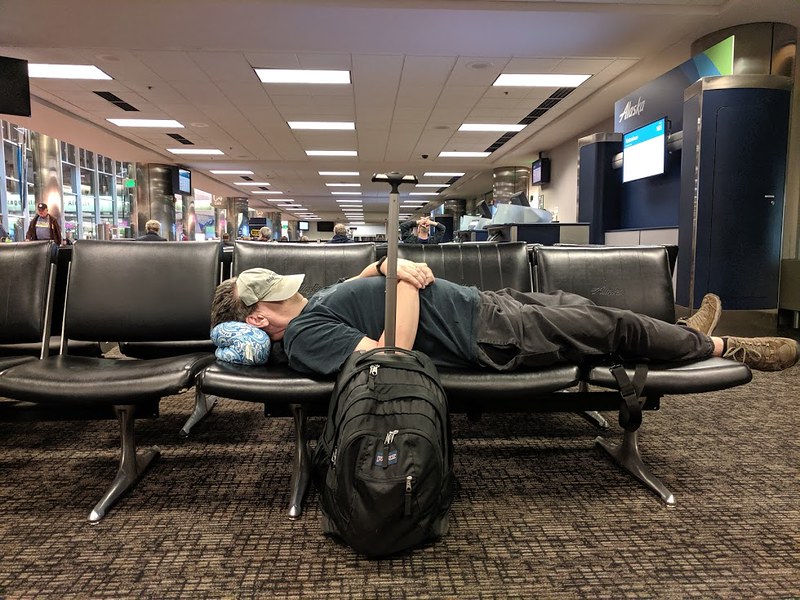 Ted Stevens International Airport is really nice and modern. The bathrooms are much cleaner than SeaTac, lots of Native American art and stuffed animals to peruse, and more importantly, lounging areas without armrests so we could spread out and attempt to catch a few winks before we retrieved our rental car. With a guy coughing his lungs out, an employee vacuuming the area and being in unfamiliar surroundings, we almost didn’t get any sleep.

The car rental counter eventually opened up and we were on our way downtown at 6AM. Downtown Anchorage is really close to the airport and we found ourselves driving around in a haze with nothing planned. Checking our phones, we discovered sunrise isn’t until 8:30AM so combined with our fatigue, we couldn’t really get a sense of the area. We were just really biding our time until our first stop was open: Great Harvest Bread Company. 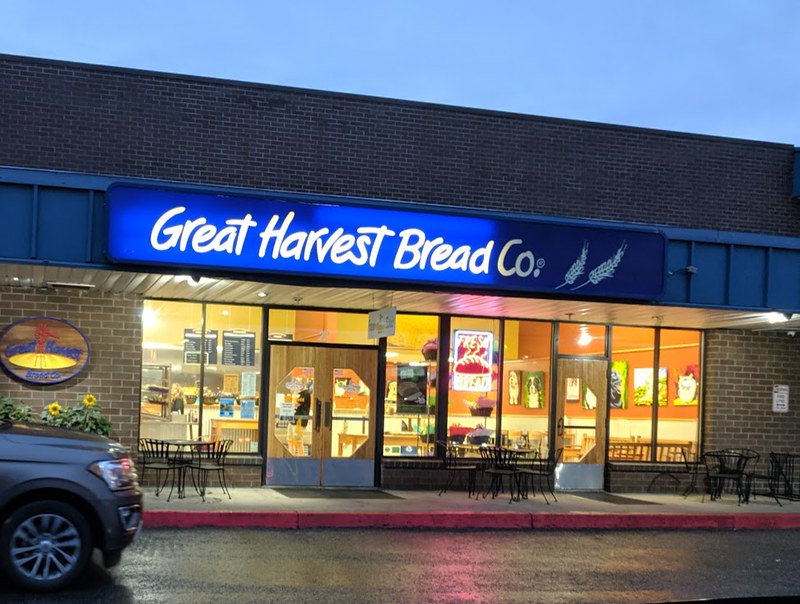 Even before the 7AM opening time, we found ourselves slowly heading toward the bakery so we could be there when it opened. In doing research of where to eat in Anchorage, I was initially looking for doughnut places but saw this bakery at the top of the list. The most common thing people mentioned was the bread sample board and it was ready for customers when we arrived. 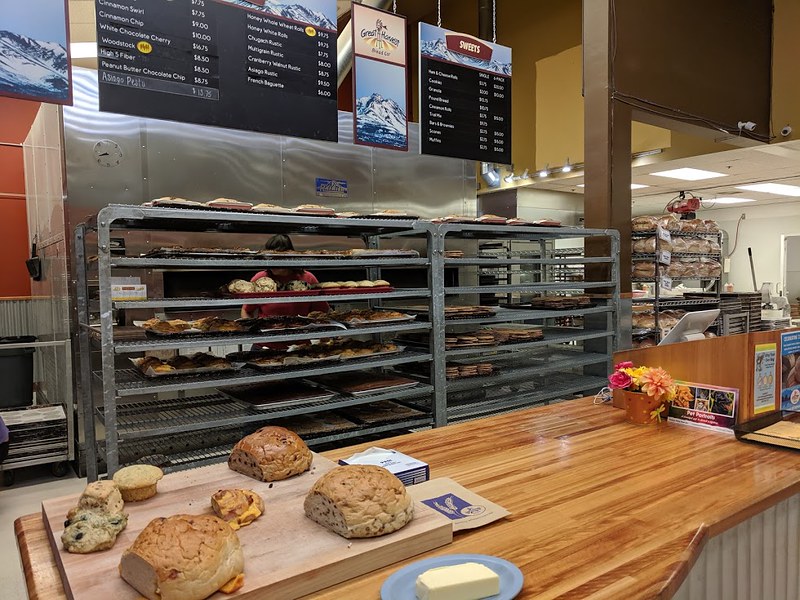 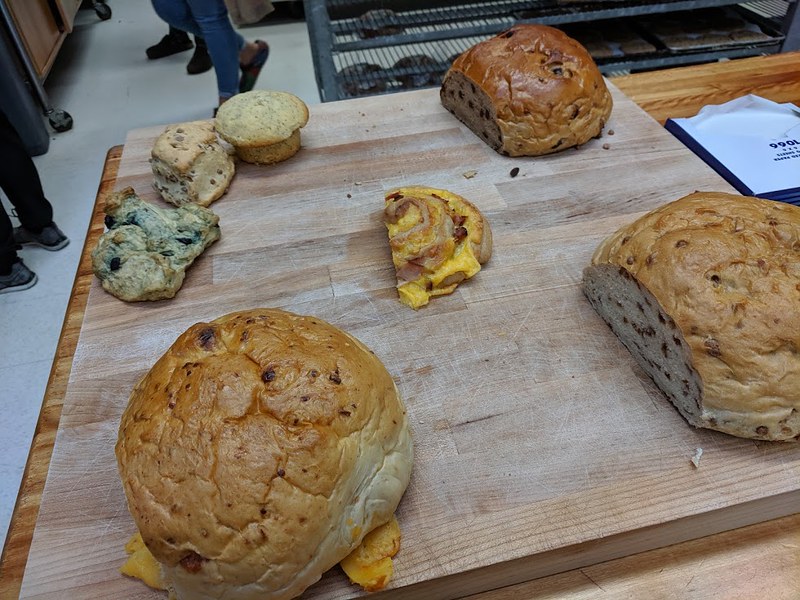 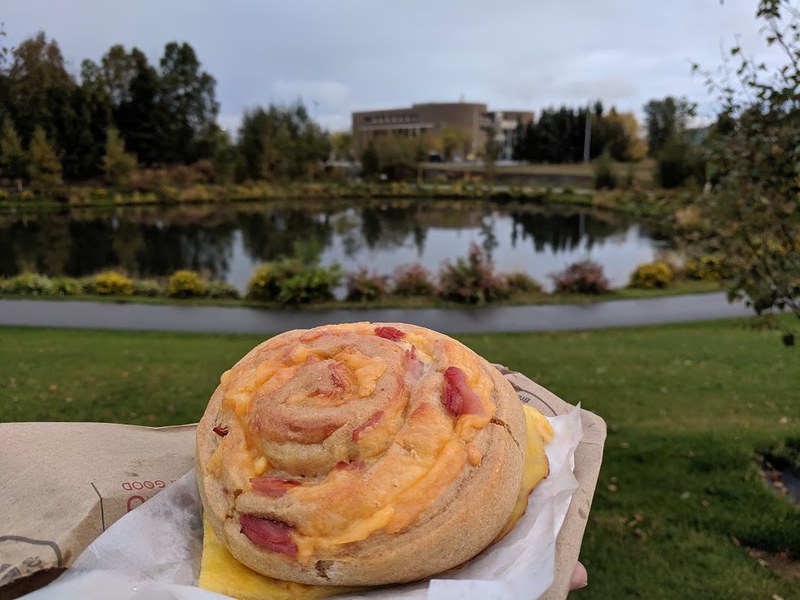 Several full-sized loaves of bread were already set out and they were also putting out scones and other goodies. Curious about something? Ask for a sample. That’s what I found out when I spied a savory roll with cheese melting cheese under a tray of traditional cinnamon rolls. The samples are huge by the way, and we could have easily filled up on that alone but decided on warm, savory ham and cheese roll to tide us over for breakfast. (Sandwiches and selection of drinks are also available.) 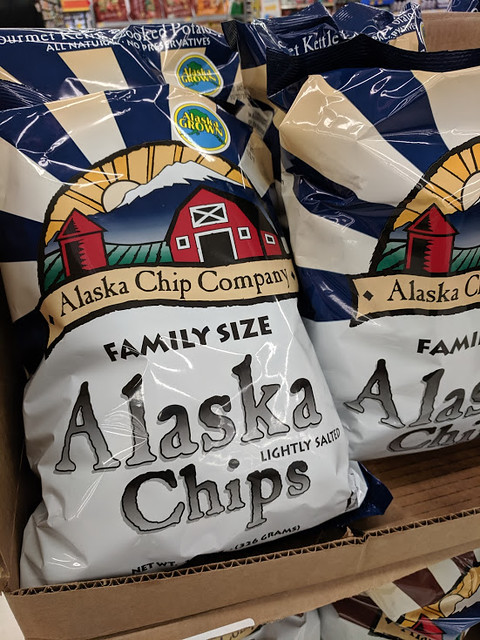 Our next stop was to fill up on provisions at Walmart. A gallon of drinking water for me (I don’t like drinking water straight from the tap) and cans of coffee for Paul. I regret not buying this bag of chips.

Exhaustion was hitting us fast and it was only 10AM. We booked an inexpensive, well-reviewed motel at Palmer about 45 minutes north of Anchorage. We made a stop along the way at Mirror Lake to admire the foliage and we felt like we were truly in Alaska. 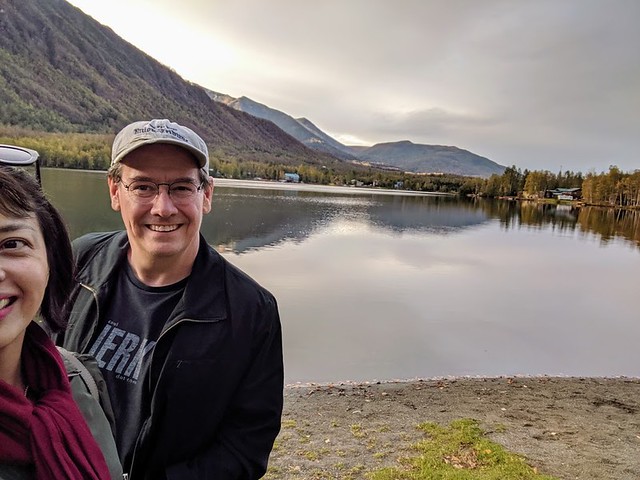 Mosquitos were flying around even at a balmy 50°F despite the employees at the bakery were telling us how unusually warm it was for this time of year. Though the drive to and from Palmer to Anchorage and points further south was long-ish, it gave us time to appreciate the scenery. Unfortunately, we saw two dead bears, an adult and a cub a few miles later, as well as a porcupine, beaver and signs for how many moose were killed on the freeway.

Check-in at the motel was at 3PM but being such a small establishment, they let us check in nearly six hours early to sleep. A relief for us as we tumbled into bed and slept until we were hungry.

In planning the trip, my goal was to eat as much seafood as possible. I did research on several places and we ended up at a bar known for serving pilots.

F Street Station is a tiny bar, a first-come, first-served establishment but we were there during off hours at 3PM and quickly found a seat at the bar where we ordered a crab melt sandwich and fried halibut with a side of clam chowder. The crowd was a mixed of regulars and tourists (I based this on the size of their backpacks). 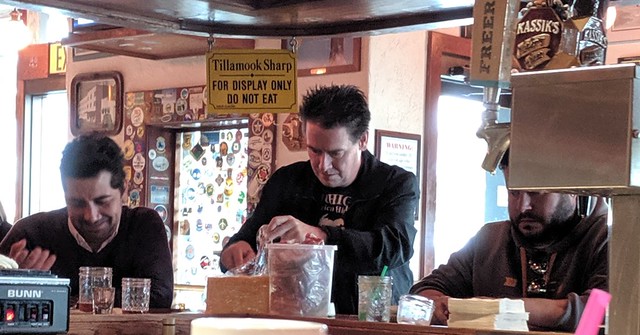 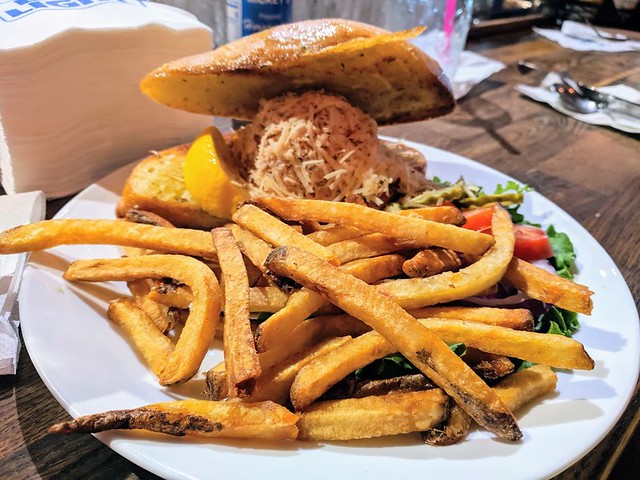 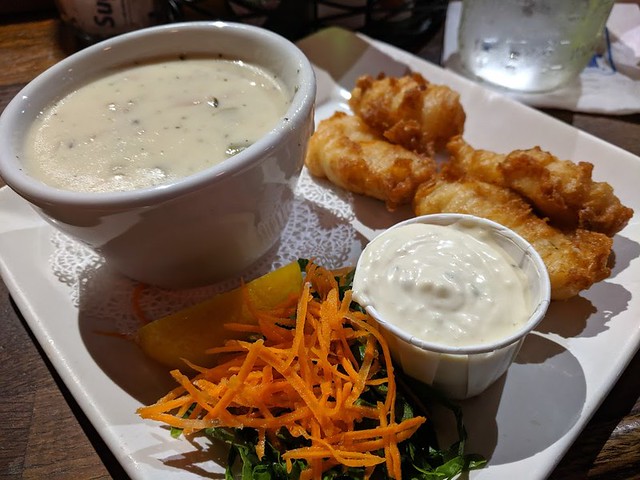 A good first solid meal in Alaska but our order of the Texas-sized (instead of the larger Alaska-sized) serving of halibut looked puny at only four nuggets. The nuggets were slightly greasy but the chowder made up for it. Opposite the end of us was a huge block of cheese with a sign declaring it was for display only. During our time there, we saw a homeless person attempt to steal it and later, several people slicing off chunks to eat. After determining that the appropriate amount of people had sliced off enough cheese to remove the homeless person’s fingerprints from the cheese, Paul went over to cut some samples for us to eat.

Downtown Anchorage is different than what we saw earlier that morning. More people were wandering about and there were also some people begging for money. The downtown area is really small and if it wasn’t for the spurts of rain, we would’ve walked the entire area.

We still had some room in our stomachs for ice cream at Wild Scoops. There are two Wild Scoops locations and the one were went to was the midtown area – right across from the Great Harvest Bakery. We couldn’t help ourselves and wandered into the bakery again for a sliced loaf of their renowned cinnamon chip bread to bring with us back to the motel, a cookie to keep in the car and a taste of their white chocolate cherry bread, the most expensive loaf in the bakery priced at more than $16. 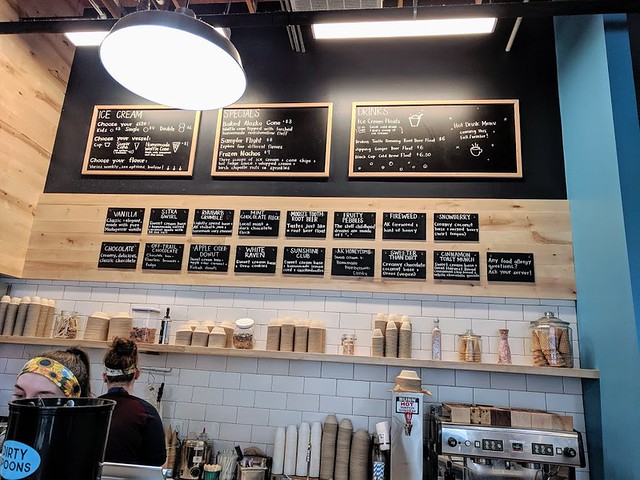 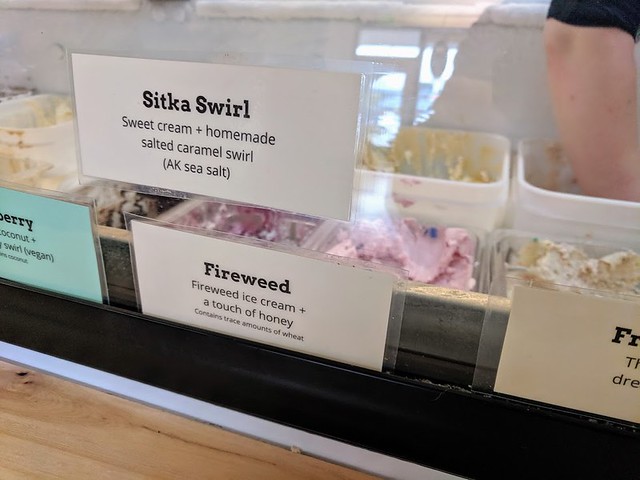 Wild Scoops’ claim to fame is their unique flavors. We counted 16 flavors including Cinnamon Toast Munch featuring Great Harvest’s cinnamon chip bread, Moose Tooth Root Beer using root beer from a popular pizza joint and brewery in town, and other seasonal flavors. It’s here we discovered fireweed. In asking about it, the person helping us out asked us how long we’ve been in Anchorage and laughed when we said only six hours. She explained that fireweed, a fuchsia herb, can be found everywhere in Alaska. It’s alongside the highways, empty lots, etc, and tastes unlike anything she’s ever had. And she was right except I detected a slight berry aftertaste. We ended up ordering a rhubarb crumble but made into a baked Alaska with torched meringue on top. 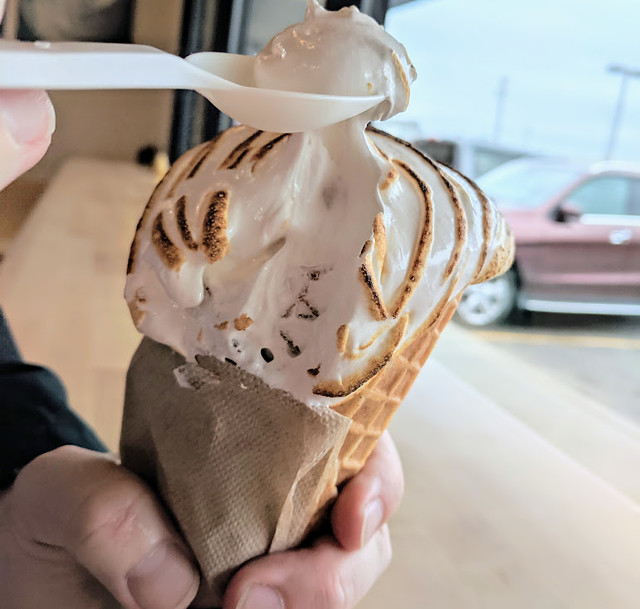 Baked Alaska while we were in Alaska? Sure. So glad we shared this cone because we were at maximum capacity and ready to drive back to the motel and prepare for tomorrow’s full day.