Birthdays are looking really different in 2020 for a lot of people and for me, that includes birthday cakes. I took the simple route for Paul’s birthday cake this year not wanting to bake and make it as simple as possible and what’s more simple than an icebox cake. I’ve never attempted making one before but knew the concept behind it. Wafer cookies layered with sweetened whipped cream is refrigerated for a few hours until it’s soft enough to cut.

For Paul’s birthday icebox cake, I mixed things up a bit and halved the whipping cream. One part was with just sugar and vanilla, and the other half with chocolate Ovaltine, Paul’s favorite milk add-in, to be used as the inside filling. (Check out my recipe for Ovaltine cookies.) 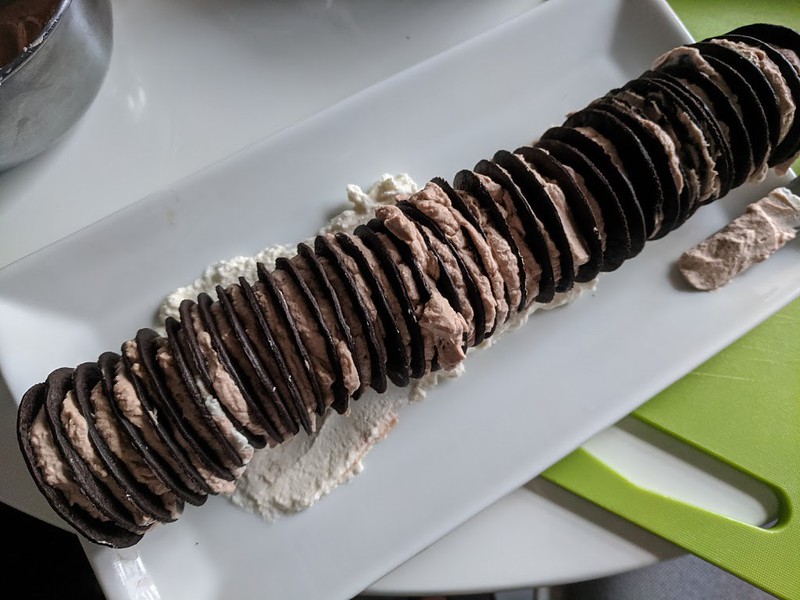 Assembling the cake is super easy and the only equipment you need is a hand mixer to whip the cream. While there are variations on assembling icebox cakes, I went with the traditional log shape. The wafer cookies, which are not until unlike the cookies used for Oreos, are layered and placed on its side until all the cookies are used up and the remaining whipped cream is used to cover the entire “cake.”

If you cut it at an angle, cookies look vertical giving it its alternative name, zebra cake. Easy to adapt to your own tastes and easy to assemble!

Spread vanilla-flavored whipped cream over cake until completely covered. Move cake into refrigerator and cool for at least 4 hours before serving.