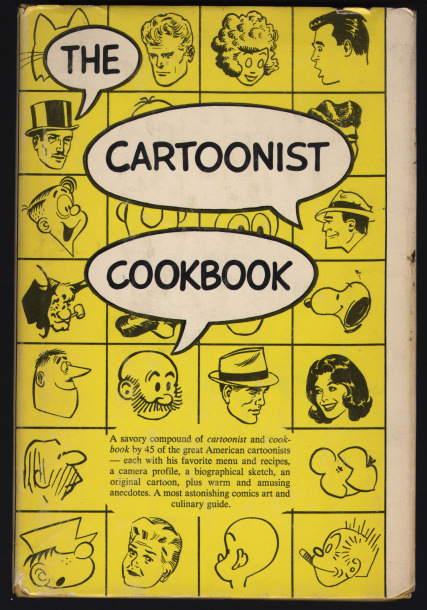 I didn’t put much planning into this but somehow it worked out that the last few posts have been pop culture-related, starting with the Harry Potter celebration at Big Sugar Bakeshop to the Simpsons-inspired Kwik-E-Mart in Burbank.

So in conjunction with the San Diego Comic-Con that will be invading my hometown this week, I’ll keep up the momentum by posting about a cookbook residing on my kitchen shelves.

The aptly titled “Cartoonist Cookbook” features a variety of newspaper cartoonists from 1966. The obvious likes of Charles Schulz (“Peanuts”) to lesser-known Stan Drake (“The Heart of Juliet Jones”) are included.

The cartoonists featured in the book offer up a mini bio, a photo and a sample of their work alongside their menu. Everyone’s recipes are at the very back.

The menus are very telling about the time and place of America. Some of the menus include a cocktail of some sort and a potato and meat dish in a souffle-slash-casserole combination. Some are just downright attrocious such as Peter Hanson’s (“Lolly”) menu of garlic popcorn, stroganoff hansen and eggplant malibu. What meal is this for Mr. Hansen?

Others I just wonder if it’s their actual menu or their wive’s-slash-housekeeper’s like Dr. Athelstan Spilhaus’s (“Our New Age”) menu of cold clear borsche, crab nebula, asparagus with hollandaise, belgian endive, Poully Fuisse 1951, Wisconsin swiss cheese and apple finished off with medoc or port. All I can say is wow.

A scan from Neal Adams’ entry in “The Cartoonist Cookbook” with his signature from last year’s Comic Con.

But my favorite menu is by one of my favorite artists, Neal Adams. Long before he went on to DC and Marvel working on titles like Batman and the X-Men, he did “Ben Casey.” His version of Batgirl is just downright lovely, although admittedly his work for the Flonase commercial is cringe-worthy. But that’s forgiveable because he is a handsome man (then and now) and he still has all his rockstar hair.

Exotic for 1966, Neal Adams’ menu features Chinese food in what I can assume is the authentic Mandarin name. Mr. Adams can cook for me anytime.

“The Cartoonist Cookbook” can occasionally be found for sale on eBay for a steal and it deserves a place on the shelf for any fan of comics and cooking.

7 thoughts on “The Cartoonist Cookbook — A time capsule to 1966”