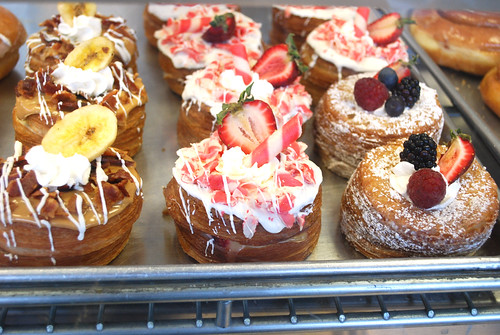 Before the month gets away from me without a post, I had to write about another cronut find. Just when I thought I had seen the last of any new cronut sightings popping up, I received an email about a few seen at San Diego’s Finest Donuts. 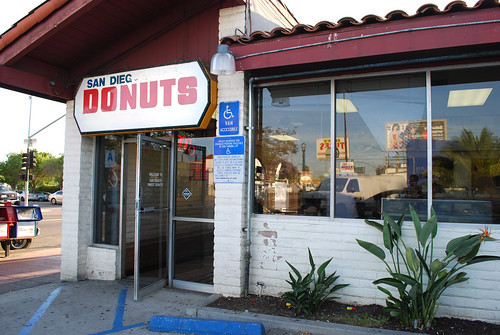 They are only available on Friday after 9 AM with a few varieties available. According to the lady working behind the counter, the flavors rotate and they make about a batch of 60. The rest of the selection looked pretty standard with sprinkled, frosted and glazed filling out the rest of the display case. Doughnuts starts at $.85 for buttermilk, plain, twists to $1.50 for fritters, eclairs and cinnamon rolls. Heads above everything else are the cronuts at $5 each. 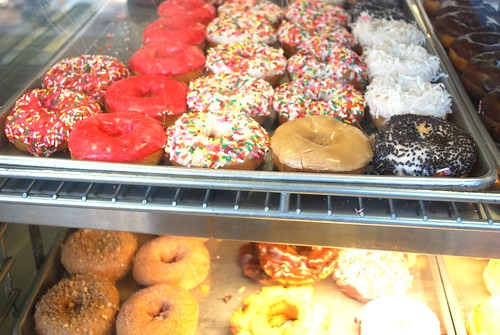 At such a steep price, I opted for just one of the three varieties on display. (I forget what the other two were.) The Elvis cronut is filled with sliced bananas, peanut butter, whipped cream and bacon along with a few standard doughnuts that Paul really had to get. 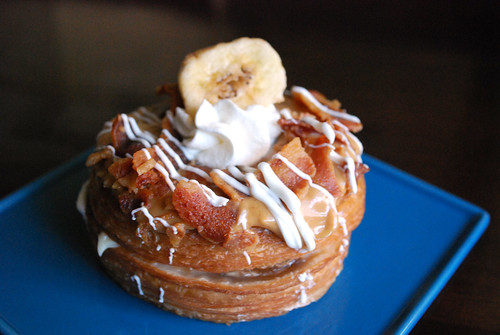 First off, it’s a beautifully decorated donut with a dried banana chip on top. Attempting to cut the cronut in half kind of ruins it. You can still see the layers after it’s cut but the peanut butter, whipped cream, sliced bananas and bacon squeeze out of it. 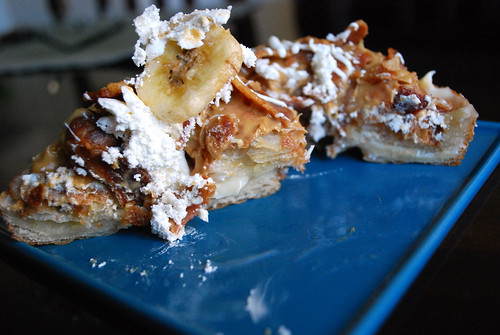 Disastrous spillage aside, I really enjoyed it. Never having had anything remotely like it, I liked the combination of peanut butter and bananas with a bit of smoke and salt from the bacon. Elvis was onto something! It could have done without the whipped cream but with so many ingredients going on, the cream was a bit lost. My biggest qualm about cronuts in general is that oil tends to accumulate at the bottom. This one didn’t suffer from any oiliness. The flavor combination may not work for some – Paul thought it was weird but has never had bananas and peanut butter together – but if you’re looking for a cronuts, San Diego’s Finest Donuts should be the first place to look.